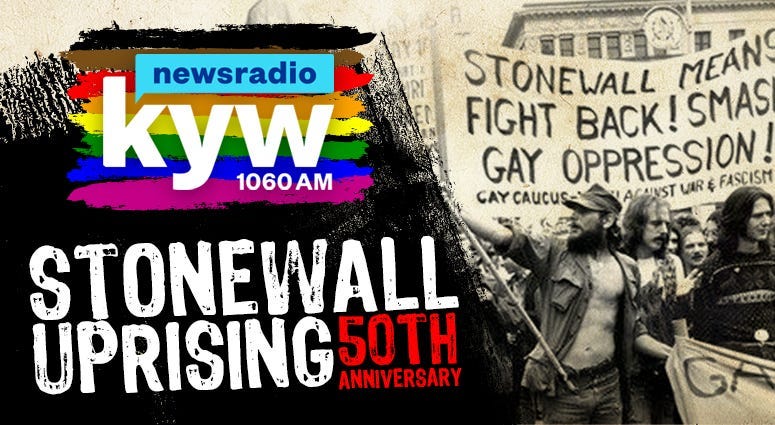 June 10, 2019 06/10/2019 10:00 am
PHILADELPHIA (KYW Newsradio) — Years before the Stonewall riots, Philadelphia was the hub of the LGBT rights movement. That's thanks in large part to the work of one trailblazing activist.

Frank Kameny is often described as the father of the LGBT rights movement, but as he said in a 2009 interview with KYW Newsradio, "Well, that overstates it. A founding father among many."

In 1965, a collective of what were called "homophile" organizations started a series of Independence Day picket lines outside of Independence Hall, called the Annual Reminders.

Kameny recalled how he wasn't even sure if the police would give his group a permit to demonstrate, "that was a very, very, very different era."

The reaction was extreme.

"They were tourists. They weren't expecting to see us," says early gay-rights activist Kay Tobin-Lahusen.

What those tourists saw that day were picket signs that carried messages such as "Equality," "Opportunity" and "Homosexuals should be judged as individuals."

"They were kind of dumbfounded. One man showed up with his kids, and he said to his children, 'Hold your noses. It's dirty here,'" said Tobin-Lahusen, who helped organize the marches and took photos.

"And another straight woman said, 'I don't believe this. They're all actors.'"

That disbelief might have been by design. Bob Skiba, curator of the John J. Wilcox, Jr. Archives at the William Way LGBT Community Center in Philadelphia, says Kameny had very strict rules for how marchers could behave and what they could wear — men in suits, women in dresses.

"Some of us were a little horrified," says Marj McCann. At the Annual Reminders, she and her fellow activists tried to — as she puts it — "assimilate."

"We'd been trying so hard to be presentable and assimilate, and here were these people rioting, for crying out loud," says McCann. "They were going to give us all a bad name."

History would remember Stonewall differently. Just days after the riots was that year's Annual Reminder march. It would be the last one. In October of 1969, the East Coast Homophile Organization voted to replace the Reminder Day demonstrations with with an annual Christopher Street Liberation Day March in New York City on the last weekend in June to commemorate the Stonewall riots — the prototype for today's Pride marches.

Malcolm Lazin, executive director of the Equality Forum in Philadelphia, says the Annual Reminders paved the way for Stonewall and for Pride.

"In many ways Stonewall really resulted from — and is a direct beneficiary of — the Annual Reminders that were being held in Philadelphia," he said.

The Annual Reminders grew out of Kameny's life's mission: fighting discrimination against gays and lesbians in the workplace. It was a fight that was personal.

When the United States entered World War II, he had to lie about his sexual orientation to join the Army. He said, "I have resented for 66 years that I had to lie to my government in order to serve in a war effort that I strongly supported."

Years later, Kameny was fired from his job as an astronomer with the United States Army Map Service when he was outed.

But, he says, after Kameny was fired, his entire demeanor changed. "So he started letter writing, and he wrote thousands of letters to everybody."

Eventually, he started the Mattachine Society of Washington, D.C. Mattachine and other so-called homophile organizations along the east coast held their first joint conference in Philadelphia in 1963.

Tobin-Lahusen met Kameny at one of those early conferences.

"And I listened, and I said 'Oh boy, this guy's really got a lot on the ball," Tobin-Lahusen says. "He can think clearly about our movement. And I ran and got Barbara and said, 'Come on.'"

It was a fateful introduction. The Barbara she mentions is Barbara Gittings — often called the "mother" of the gay rights movement.

In addition to organizing the Annual Reminder marches together, Kameny and Gittings would successfully petition the American Psychiatric Association to declassify homosexuality as a mental disorder.

Kameny's personal fight would last decades. Kameny died in 2011, but he lived long enough to see several victories for the movement he helped lead.

Seventy years after he enlisted in the Army, Kameny was in the room as President Obama signed the repeal of Don't Ask, Don't Tell.

Sixty years after he was fired from his government job for being gay, Kameny saw a gay man become the head of the government agency that fired him.

He called that moment, "like the contrived happy ending of a fairy tale in which everything is resolved."

But his proudest achievement is one he believed helped turn the tide of public opinion. It was a letter he wrote to — of all places — Playboy. It had the headline: "Gay Is Good."

"If I am remembered after I'm gone for nothing else," Kameny said, "I would like it to be for having coined the slogan 'Gay is good.'"​