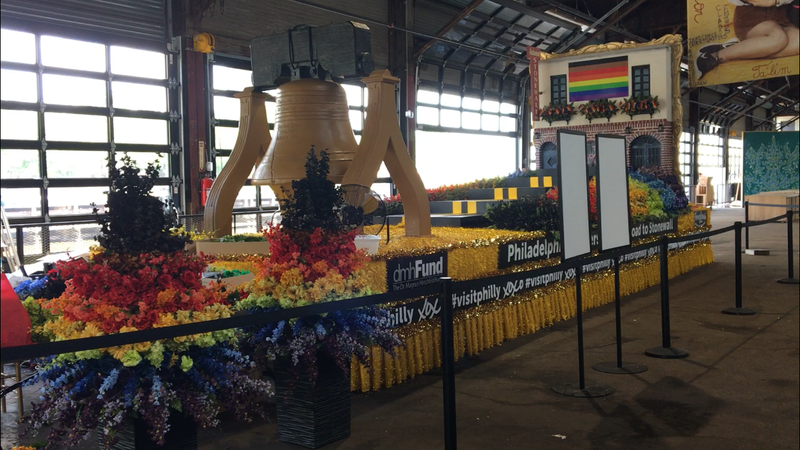 June 6, 2019 06/06/2019 7:52 pm
PHILADELPHIA (KYW Newsradio) — The finishing touches are being made on Philadelphia’s pride float at Cherry Street Pier, titled, "Philadelphia Pioneers On The Road To Stonewall."

Philadelphia’s pride float marks the 50th anniversary of the Stonewall riots that started the LGBTQ movement.

“Liberty Bell, road, Stonewall. So 'On the road to Stonewall,' ” explained float designer Todd Marcocci. In addition to those key design elements, he’s also adding hundreds of handmade flowers, which he made himself over several months.

"It was a project every night for four to five hours: Go to bed, wake up, work more."

Marcocci calls it the "field of honor."

"As I was handmaking all of those myself, I started naming the roses, the daisies," he said, "and one was Matthew Shepard; I named one Harvey Milk. So taking all these different people with you that were there in memory."

Rachel Furguson with Visit Philadelphia said the float will be making three appearances this summer.

"In Philadelphia for our Pride Parade on June 9. Then it will make its way to New York for World Pride (on June 30) — this is the first time its being held in the United States. And then back again to Philadelphia for July Fourth," she said.

Visit Philadelphia partnered with the Commonwealth of Pennsylvania and the Dr. Magnus Hirschfeld Fund to create the hand-painted float.

The 34-foot float features more than a million golden eyelashes, 1,700 feet of rainbow ribbon, and almost 42,000 square inches of Styrofoam.

Marcocci noted he used the theme of the number five to mark the anniversary of Stonewall: “The center of the float has a road and it's on five different levels, so the way I looked at it was each level represented a different decade.”

A computerized replica of the Stonewall Inn sits at the back of the float, on the top of the five-tiered road.