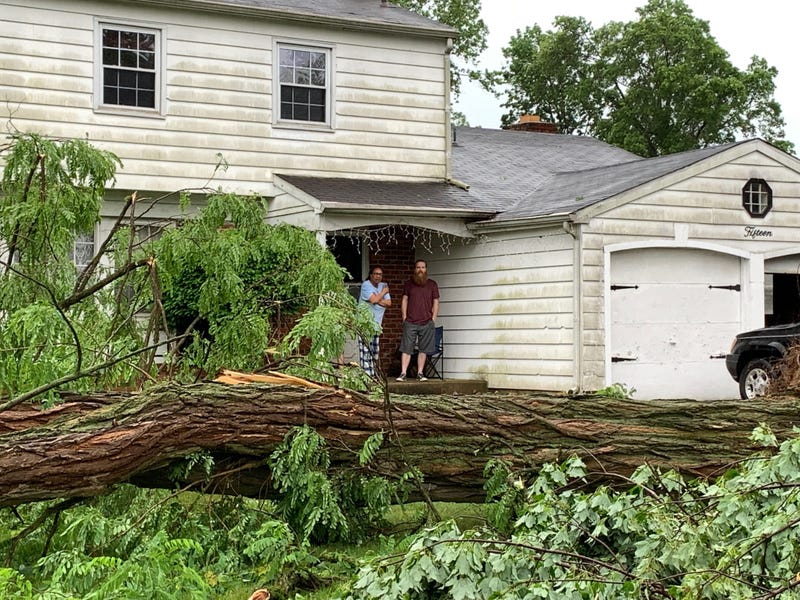 PHILADELPHIA (KYW Newsradio) — A massive storm took down trees and power lines as it rapidly moved across the Delaware Valley Wednesday afternoon.

Just as quickly as the downpour appeared in Reading, it had moved on toward Montgomery County, then Philadelphia, South Jersey, and the shore.

Winds were reported as high as 80 miles per hour near Pottstown — 83 mph at one point in Reading — along with some hail.

In hard-hit Montgomery County, the storm claimed at least two lives and knocked out power to tens of thousands.

The storm also came through at the same time that Perkiomen Valley High School was trying to host its drive-thru, socially distant graduation ceremony.

Perkiomen athletic director Larry Glanski was ushering cars in for the ceremony when the skies turned dark gray.

“I’m looking at a tree about 30 feet away and it’s bent about 45 degrees,” he said. “If this snaps or a branch snaps, it’s coming right at me, and that’s when I got out of there and got under some cover.”

Everyone was safe, fortunately, and the ceremony continued after the storm passed.

Superintendent Barbara Russell recapped the weather with a smile, but after a senior year with no prom, sports, musicals, or other extracurriculars, it's just one more thing for these kids to deal with.

“What else could happen to these students? What else could wrong for them this year? It has just been a very different year and did not play out the way they expected,” she said. “They have persevered, they have endured, and they still walked across the stage with a smile.”

“It’s a lot like life,” Glanski added. “You’re gonna have peaks and valleys and things you can’t control, and no matter where you’re at, you just try to make the best of the situation, and I think they’ve done that.”

Some trees were uprooted in Cherry Hill, New Jersey. Along Church Road, crews used a chainsaw to cut apart one that had fallen onto the road.

One woman — who was too shaken to give her name — was stunned when the huge tree in her front yard came crashing down.

“I was in my bathroom upstairs. I heard, ‘Boom!’” She could hardly believe what she saw.

The 40- or 50-foot tree fell toward the street, landing only feet from her house.

Across the street, another huge tree leans over the road on an angle, its roots buckling several sections of sidewalk, as a power line dangles above.

“We started to hear the rain come down. We saw a piece of my siding — you can see on the top righthand corner of the house that blew off. That was our first indication that the wind was a lot stronger than we thought it was going to be,” he said.

His next indication: The sound of a huge tree toppling down.

“You did hear the crash. You also heard the transformer as well. There was a big bolt of light that you saw in the sky when the transformer was hit, and the power went out immediately after that.”

Trees down and power out in this section of Middletown Twp #delco @KYWNewsradio pic.twitter.com/8J8vMPIFj8

Work crews in Upper Darby were quick to remove the debris, including one tree that fell on a power line.

Danielle Gallagher was so busy working in her home that she didn’t notice part of a huge tree fell on her property.

Her neighbor rushed over to tell her.

“When I came out and looked at it, and saw that it was on the wires, I said, ‘I better call 911,’ because I don't know what these wires are and how dangerous they are,” she said.

Crews in Upper Darby are cleaning up damage done by severe storms that came through the area this afternoon @KYWNewsradio pic.twitter.com/8JDxDYZnhV

Gallagher said she's lucky there was no damage to her house.

“Everything is fine house-wise, and if that's the worst of or, the fence, I'll take that,” she added.

Tom Bates’ neighbors were not as lucky.

His house in Media was spared, but some tree debris ended up on neighbors’ roofs.

“They're up there right now with some clippers and some ladders trying to take it down,” he said. “There are some lines that have been pulled down by a tree across the street.”

This behemoth of a tree in Media, Delaware county fell victim to this afternoon’s storms that came through like a wrecking ball @KYWNewsradio pic.twitter.com/XqXS76sDJ4

The storm seemed to be picky on who it hit. It left some blocks a mess, and others clean as a whistle.

The shore did not see as much damage, though beach towns weren’t totally in the clear.

John Ridgway saw the skies turning fast, so he drove from his home in Linwood to Somers Point, where his boat is docked.

“Typically what you do, you come down, you double-check the security of your lines. You make sure if you’ve got covering on, they’re all secured and you don’t have anything lying loose inside the haul that the wind is going to get a hold of,” he said.

A marina employee said at least two dozen boaters rushed to do the same thing.

“It was a pretty intense storm, it was quick-moving,” said Ridgway, “but I was pleasantly surprised. There was definitely some debris, windblown stuff, mostly tree needles and branches. No canvas coming off or anything like that.”