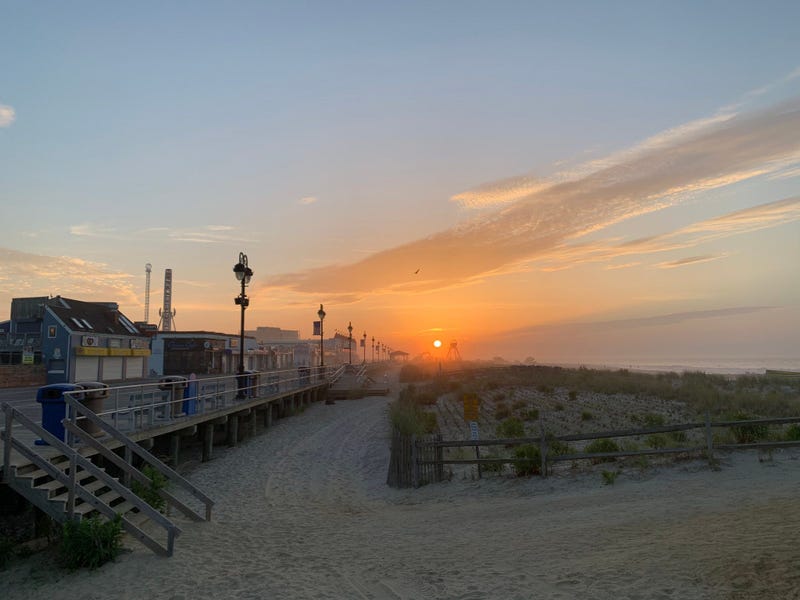 On the beach and the boards of Ocean City, people were soaking in the shining sun and gentle ocean breeze Monday morning. You would never know a tropical storm watch and a flash flood watch were in effect until Tuesday, with 4 inches to 6 inches of rain expected.

Gusts of 40 mph to 50 mph are projected, with the potential to cause power outages along the coast, but Bob Hulme of Cherry Hill said he isn’t too worried.

"I think the winds will be a little higher, and it’ll be good kite flying weather," he said.Tuesday will be a whole different ballgame.

Good morning. Please see our updated briefing on #Isaias, which will begin affecting our area tonight (you may need to refresh the page). We are increasingly confident in heavy rain/flash flooding, and tropical storm force winds. https://t.co/JiD09BPJVv #NJwx #PAwx #DEwx #MDwx pic.twitter.com/0mf2P10pQy

“When I see possible 75 mile per hour winds, I get out my Rosary, and I start praying," said Ocean City resident Maggie Lydon.Lydon has been living down the Shore for 25 years, and even though she has experienced her share of storms, she’s still concerned when a big one is expected to hit.

"Lost everything in the garage, including my car," she said.

Authorities are warning residents and visitors of potential street flooding, even in places that don't normally flood. Drivers may need to move their cars to higher ground.

As businesses already struggle with a loss of income because of the coronavirus, trouble from this storm is particularly unwelcome.

Isaias weakened from a hurricane to a tropical storm Saturday, but still hit Florida's east coast with heavy rain and flooding on Monday morning, as state officials continued to deal with surging cases of the coronavirus.

The National Hurricane Service said Sunday night that the storm is centered about 50 miles east of Cape Canaveral, and about 365 miles south of Myrtle Beach, South Carolina. Isaias is forecast to reach near-hurricane strength by the time it reaches the Carolinas.

In Sea Isle City, some bars and restaurants along Landis Avenue have taken down the tents they’ve been using for outdoor dining.

“We're hunkering down,” said Shoobie’s owner Joe Roberts as he was bringing tables and chairs inside. “(Putting) furniture away, things that are going to blow away have to be put away. The way things are going here and the way business is, losing a Tuesday a year ago would have been like ‘oh ok we get a Tuesday off,’ now even the help goes ‘oh really we’re not going to open.’ ” he said.

Back by the bay, boaters were bringing out the extra lines to secure their boats. Some took it even further than that.

“We’ll be pulling our boat out,” said Scott Cosmi. “(We’re) supposed to get a lot of rain and in case your bilge pump doesn’t work, it’s always best to take it out, open up the plugs, put it on dry land. It’ll be much safer there.”

Street flooding will also be a big concern down the shore on Tuesday.

A Sea Isle spokesperson said drivers are advised to keep their cars away from streets that tend to flood. Those streets are marked with signs.

Those in Ocean City can move their car to Trinity United Methodist Church along North Shore Road in Marmora to keep it safe from street flooding.

Atlantic City’s mayor announced the Wave Parking Garage will be open to cars for the same purpose. They can be parked there starting at 8 p.m Monday.