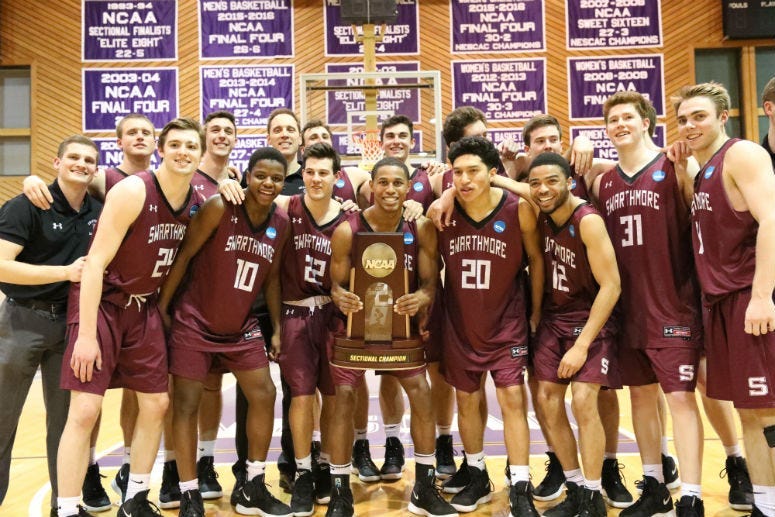 March 12, 2019 03/12/2019 8:12 pm
PHILADELPHIA (KYW Newsradio) — For the first time in program history, the Swarthmore College men's basketball team is getting ready to play in the NCAA Division III Final Four.

The 28-3 Garnet will take on Christopher Newport University in the national semifinals on Friday night at 6:00 p.m. in Fort Wayne, Indiana.

Swarthmore has won four games in the tournament to get to this point. The victory that punched their ticket to the Final Four came this past Saturday when the Garnet held off Nichols College, 69-65.

Swarthmore never trailed against Nichols and actually led by as many as 19 points in the first half before holding off the Bison down the stretch.

"The way we came out and kind of put them on their heels early was satisfying," Swarthmore head coach Landry Kosmalski said. "We defended them, I think we were physical and then we attacked them offensively. Kind of the way we try to play. The game went like a lot of our games this year, although it was a little tighter than we would've liked at the end."

That win over Nichols was a program record 14th in a row for the Garnet, who now focus on this Final Four battle with Christopher Newport. The Captains are riding a 13-game winning streak and they bring a 29-3 record into Friday.

"We did play them in the NCAA Tournament two years ago (Swarthmore lost 77-67 in a second round match-up), so we know them a little bit," Kosmalski said of Christopher Newport. "I know John (Krikorian), he's an excellent coach, I mean a very, very good coach. So we know that they're well coached. They're a very physical team, athletic team, disciplined team. Very tough as well. So they're going to really try to take away what you like to do offensively with their toughness and their athleticism."

Kosmalski talks about what it will take to have success on Friday night.

The other Final Four match-up on Friday will have Wheaton College taking on University of Wisconsin-Oshkosh.

The two winners Friday will meet for the National Championship on Saturday night.

news
Supreme Court Justice Ruth Bader Ginsburg Dies at 87
music
Will There Be a Red Carpet? Here's Everything We Know About the 2020 Emmys
news
Tropical Storm Beta Forms in Southwestern Gulf of Mexico
i'm listening
Listen To the 2020 Edition of 'I'm Listening' - Talk Has the Power To Save Lives
sports
Kendrick Perkins on Celtics Facing 0-2 Deficit to Miami: ‘This Series Is Over’
music
RADIO.COM LIVE Check In: Smith & Myers on Weird Cover Requests and Staying Sane on Social Media