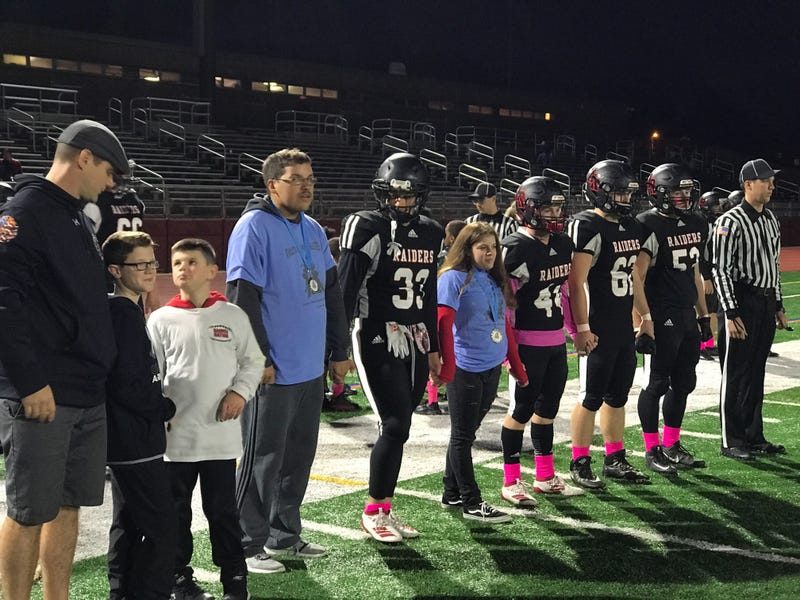 October 20, 2019 10/20/2019 3:28 pm
PHILADELPHIA (KYW Newsradio) — A teenage girl with special needs was devastated when she was set to be honorary captain during a high school football game but got overlooked. But one of her peers stepped up to make it right at another game in the Northeast on Saturday night.

Jina Sciarra said for kids like her daughter Alivia, with special needs, the little things mean a lot.

But Sarah Vargas, and her friends at Athletes Helping Athletes, were intent on making it right.

"I got really upset when I heard that she was really disappointed," said Vargas, student president of the AHA chapter at Archbishop Ryan High School, "because we had two honorary captains on our side and they have a great time."

At Northeast High, Alivia not only got to toss the coin at the start of the game between Archbishop Ryan and Roman Catholic High School, but in a surprise to her, she was also crowned honororary homecoming queen.

"It makes me emotional," said Sciarra. "Alivia's sister is really involved with kids with special needs and Sarah just did what she's suppossed to."

Vargas plans to go to college and eventually pursue a career as a speech pathologist. She said she hoped this teaches others the power of giving.

Though shy, Alivia had a few words on how the royal treatment felt.

"I feel good," said Alivia, "and I hope that the Ryan team wins."