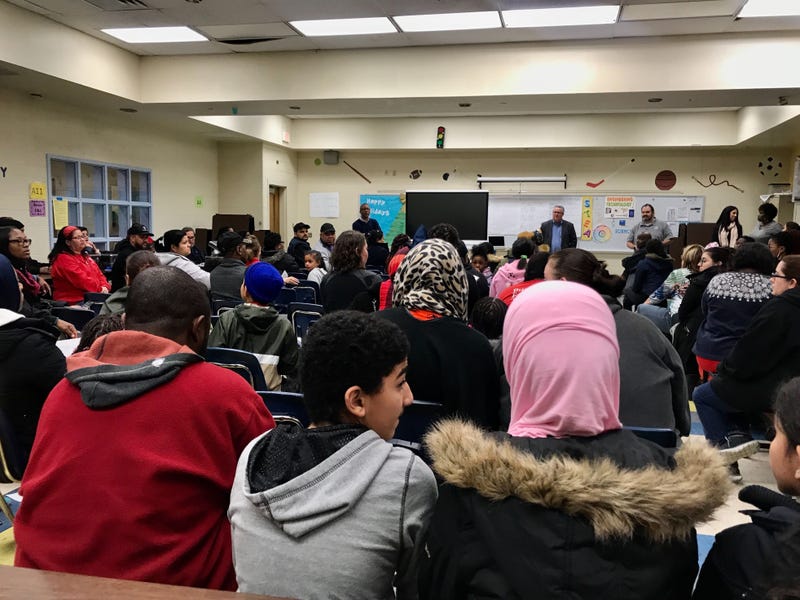 January 4, 2020 01/04/2020 2:31 pm
PHILADELPHIA (KYW Newsradio) — Laura H. Carnell Elementary School in Northeast Philadelphia has been closed for the past couple of weeks due to asbestos, and will remain closed until it's safe. That's what dozens of parents, staff and students were told at a community meeting Friday night.

School District of Philadelphia officials said they repaired about 13 of 14 threats of asbestos over the holidays. But Jim Creedon, interim director of facilities and operations, said they opted to keep the school closed until all of the "imminent" asbestos hazards have been contained. "We're not going to open the school until it's safe," he promised.

"This was in a report on the internet five years ago that they knew and nothing was done so we want answers," demanded Pearline Sturdivant, a former district employee. "The parents want answers and if there's not answers, we're going to continue to show up at meetings until we get answers."

"I know it's gym floor B that was a problem because it's been reported for years," added teacher Katrina Clark. "This would never happen in Lower Merion! Why is it happening in the School District of Philadelphia?"

Creedon said he couldn't speak for that report. "We let them know when we found this imminent hazard back in December," he claimed.But some parents said they don't feel comfortable sending their kids back to the school, such as Brittany Wess. Though she said she had a conversation with a school representative who promised her fourth grader would be safe, Wess said she didn't feel comfort "That's unfortunate, because he's been looking forward to graduation next year," she said. "It's not fair to the children."

School District representatives promised transparency moving forward on what they find in their asbestos inspections that happen twice a year. "I think there's been a renewed interest on this issue amongst the district," said Creedon. "I think were focusing on getting these issues resolved."

Editor's note: The district said on Jan. 6 that Carnell will remain closed until Jan. 13.