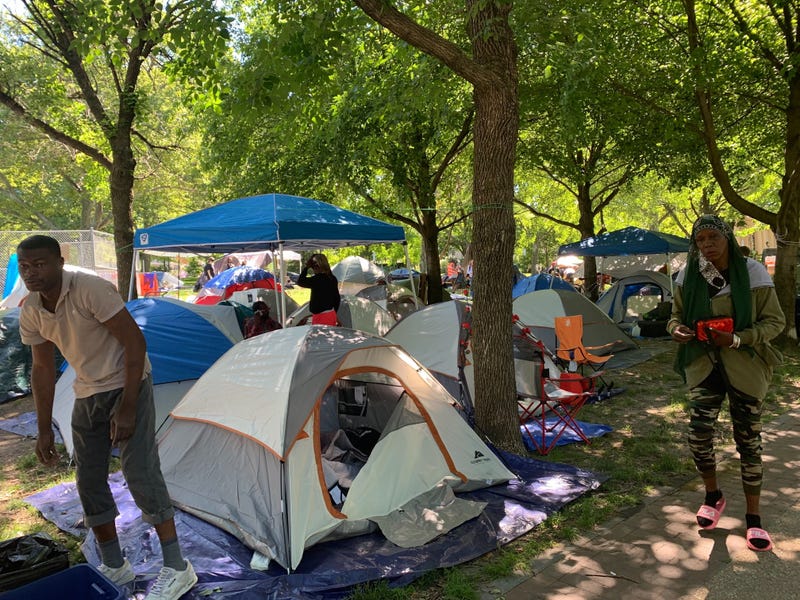 June 13, 2020 06/13/2020 10:32 pm
PHILADELPHIA (KYW Newsradio) — A tent encampment to bring attention to homelessness and housing inequities in Philadelphia has popped up along the Ben Franklin Parkway.

The site at 22nd Street and the Parkway grew from five tents on Wednesday to nearly 100 this weekend. Resident Jonnell Flowers said it's become a protest for affordable housing.

"It’s not fair," she mused. "People should not have to be homeless for multiple years. That doesn’t make any sense."

Her husband Leonard Flowers said this is a long time problem that's been highlighted by the coronavirus.

Resident Alex Stewart, with the Workers Revolutionary Collective, said among the group's demands is that the city sanction the encampment as a no-police zone and that they create permanent low-income housing.

"This country runs in one way and that's toward the benefit of profit. If the city officials or corporations cannot profit off of our backs, then they don't support us," he expressed.

According to Flowers and Stewart, homelessness is a tangible representation of a rigged system.

"We are all human beings. We all deserve to have the proper necessities that we need and housing is one of them, and being treated fairly in all aspects of the system," Flowers said.

And resident Bernadette Upchurch expressed while there may be programs, she says the city needs to do more.

"I was on the housing list for years and years and years," she shared. "Everybody don’t have the patience for that, you know what I mean? Some folks need instant help right away."

While it's not directly connected to the Black Lives Matter movement, Stewart said the encampment is sort of an offshoot of the George Floyd protests that have highlighted racial inequities.