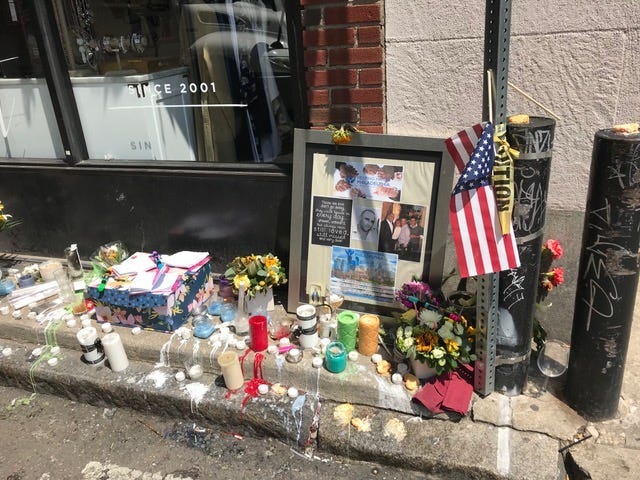 PHILADELPHIA (KYW Newsradio) — The trial of Michael White, the Philadelphia man accused of fatally stabbing real estate developer Sean Schellenger near Rittenhouse Square more than a year ago, began with an emotional and tense day in court.

Michael White sat still and quiet, staring ahead, in a dark-gray suit, as his attorneys started the day arguing whether contents from his phone should be used at trial. They questioned the meaning was behind the word  "cut," which was in White’s phone, and whether it referred to insulting or actually stabbing someone.

The judge sorted out the positions, allowing the jury to interpret their own meaning of the word, and put decisions regarding other motions on hold.

Prosecutors contend White was riding his bike while delivering food and encountered Schellenger and another man in a Ford Taurus arguing over traffic. He inserted himself, eventually pulling a knife on the victim and stabbing him to death.

He said White intentionally pierced Schellenger's skin, muscle, bone, ribs, lung and eventually aorta "with such force that his chest filled with blood," and Schellenger died.

Voci went on to say White chose to carry the knife, use it and hide it, and he chose to run away. He said a man was "slaughtered" over a traffic dispute.

At one point, they alluded to Schellenger falling on the knife.

Defense attorneys say White is sorrowful for what happened and that he only got involved in the fight because he was trying to help the driver of one of the cars. Attorney Jonathan Strange argued White acted reasonably and was justified in what he did.

Following the medical examiner's explanation of Schellenger's fatal injuries, jurors watched a recording of the stabbing, compiled of both surveillance video angles and cellphone video.

In the video, Schellenger lifts White from around the waist. White appears to have a knife in his right hand. Schellenger rolls head-first onto the ground, his legs in the air. White ends up on top of him, his legs planted on the ground. Then, his right arm goes up in the air and it is thrust back down toward the victim's back.

Laying on his stomach, Schellenger crawls forward like a military officer wriggling under barbed wire, trying to get up. He attempts to push himself forward, then suddenly stops and lays face-down on his stomach, motionless.

White runs from the scene, with a knife clearly in his right hand.

Defense attorneys contend White acted in self-defense. They picked at the detective's testimony, asking why he chose to highlight the knife in White’s hand at different parts of the video. The detective said he circled the knife at different points in the video so jurors could see the entirety of the blade.

The witness who took the cellphone video testified to what she saw, but said she couldn't figure out what started the fight. She only heard arguing before she hit record — no racial words, as the defense contends.

One of Schellenger’s friends, who was driving the car that sparked the initial encounter, testified that he never heard Schellenger use any racial language. He said he did hear someone else — not Schellenger — say, "You want this? You don’t want this."

A server at the restaurant Spice Finch testified, too, telling the jury he saw White pull a knife, which he held facing downward. He also said he saw White put his hand up to Schellenger, palm toward the victim, before the two got into the fatal tussle.

Moments later, he said Schellenger charged toward White, and the two tumbled to the ground.

White will be back on the stand Friday morning.