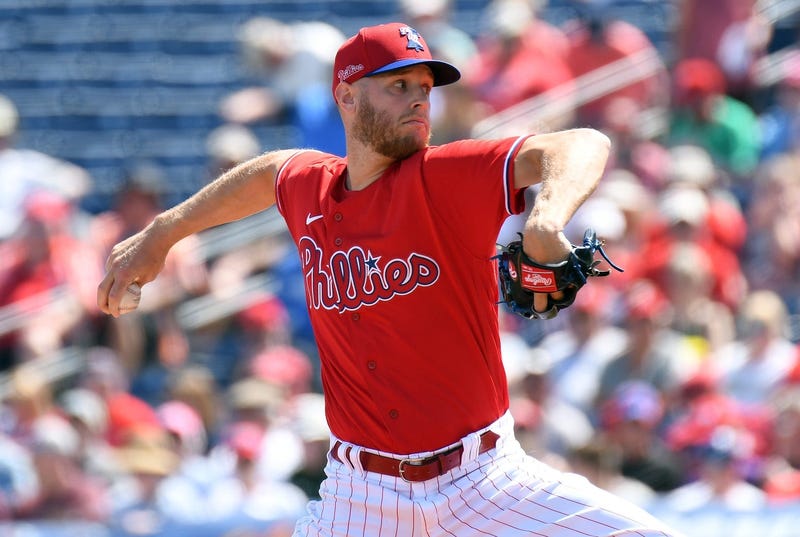 Coronavirus Mystery
PHILADELPHIA (KYW Newsradio) — Trying to play a team sport in the middle of a global pandemic does with enough risk on its own. For new Phillies pitcher Zack Wheeler and his wife, Dominique, add in the expected birth of their first child around the time the season begins.

“It’s a very difficult decision, something that is still playing in my head,” Wheeler said, when asked about whether he would be pitching this season. “I gotta be very careful here at the field, outside of the field, wherever I go.”

The hard-throwing righty was concerned coming into summer camp, but his worries have been alleviated a little after seeing how the Phillies are taking precautions. Wheeler is taking a lot of safety measures himself—washing his hands, keeping his distance, wearing a mask and practicing all the recommended guidelines.

Asked if sitting the season out were a legitimate consideration, Wheeler said, “Yeah, definitely. We just gotta see how things go here at the field and at the stadium, and I’m happy with what I see so far, but things could change.”

Wheeler is in the first year of a five-year, $118 million deal with the Phillies. In a 60-game prorated season, the figure he was supposed to make this year is obviously less. Any player with a pregnant wife has a difficult decision to make.

“There are a lot of guys with pregnant wives right now ...," he said. "They are at risk, and it’s a very serious thing, as we all know.”

Due to paternity leave, testing, and ramping his arm back up, Wheeler estimated the birth of his child will probably cost him a start or two.

The Phillies schedule, along with the rest of Major League Baseball, is expected to be released at 6 p.m. Monday. According to Craig Mish, a Florida broadcaster for Sports Grid and a podcaster about the Marlins, the Phils will open up at home against Miami on July 24.

The Miami Marlins will open up the 2020 Baseball season on the road - Friday July 24th taking on the Philadelphia Phillies, per sources. MLB releases the full schedule on Monday.

Aaron Nola hasn’t been at camp yet, for reasons unknown. Wheeler would presumably start Opening Day if Nola were unavailable. When asked if he anticipates starting the first game, assuming Dominique hasn’t given birth yet, he said he'll pitch if his wife is healthy and new manager Joe Girardi calls on him.

Wheeler described his focus on and off the mound.

“You’re out there trying to not let guys hit the ball off your forehead, so that’s my concern when I’m out there — getting those guys out, getting some swings and misses and just pitching. And then, I’m soon as I’m done with that, my first thought is, 'How’s Dominique doing,' and  immediately contacting her and just finding out ...."

However, if Dominique goes into labor, Girardi — who supports the Wheelers with whatever decision they make about the season — might be without his top two starters when they begin their schedule.

“I think that’s possible,” Girardi said. “I think it’s unpredictable when you have a due date exactly when it’s going to come.”

Girardi said they’ll have to evaluate how close Nola is to being ready for the season when he returns to the team.

In addition to that uncertainty, it is not clear why potential starting centerfielder Adam Haseley, starting second baseman Scott Kingery and others haven’t been at camp yet.

Because of HIPAA and Major League Baseball rules, teams are not allowed to disclose if someone has tested positive for the coronavirus, or been put on the COVID-19 list — which also includes players who have shown symptoms or come in contact with someone who tested positive.

At the start of his Zoom media conference on Sunday, Girardi asked that no assumptions be made about these players.

“I think the assumption is when I say a guy is out for a medical condition that he has COVID, and that is not necessarily always the case. And I’m not trying to be secretive. This is just the protocol I’ve been asked to follow.

“There’s a number of different things. Sometimes certain tests take longer than others. We don’t have any reason why. Sometimes it could be through contact tracing ....  It could be another medical condition that could be someone in their family that I’m not allowed to talk about as well."

Girardi shared that closer Hector Neris, who is on the 10-day injured List retroactive to June 30 — for an unknown reason — has arrived at camp.

At the same time, the new skipper admitted, being shorthanded could be the norm in this most unusual of seasons.

Is it a good idea to play baseball this year at all, considering the risks of the pandemic?

“That’s a good question that will probably be asked a lot, and only time will tell,” Girardi said.

If the league is able to play baseball while keeping players safe, then they made the right decision, he said.