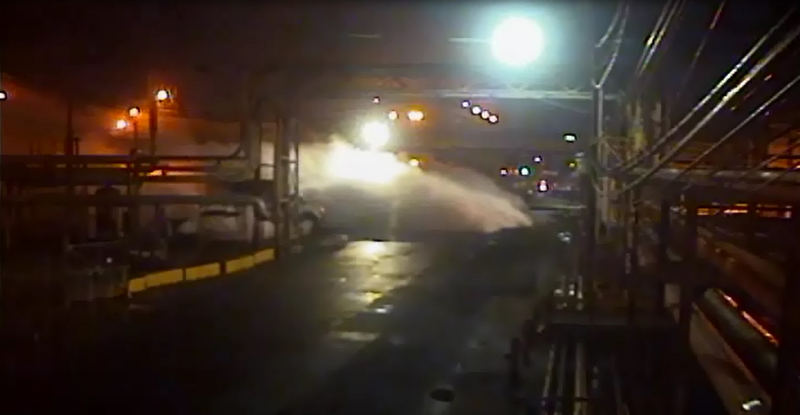 PHILADELPHIA (KYW Newsradio) — A federal preliminary report has revealed that thousands of pounds of highly toxic hydrofluoric acid were released into the atmosphere after the Philadelphia Energy Solutions refinery explosion in June.

According to a report by the U.S. Chemical Safety and Hazard Investigation Board (CSB), about 2,000 pounds of hydrofluoric acid were contained by water spray, but nearly 3,300 pounds were released into the air.

The report says a corroded pipe elbow appears to be the initial cause of the vapor cloud and subsequent explosions.

The steel in a 46-year-old pipe elbow in an alkylation unit was only about .012 inches thick — about half the thickness of a credit card — and less than 7 percent of the thickness at which the pipe should have been replaced, according to CSB officials. But that elbow was not in a location that required it to be measured for thickness.

CSB interim executive Kristen Kulinowski, at a news conference at the airport Marriott, said that section of piping was installed in the 1970s.

"Although parts of the piping circuit had been inspected as recently as 2018, the specific component that failed had not been inspected for corrosion in the last 45 years," Kulinowski said.

"This was just kind of a rogue piece, because of its metallurgical composition, that corroded faster," Grim explained.

During the early hours on June 21, the unit was reportedly operating normal. But at 4 a.m., the report says pressurized propane and toxic hydrofluoric acid began to spew from the pipe. Within two minutes, the flammable vapor cloud ignited.

By 4:22 a.m., three catastrophic explosions had ripped through the refinery.

If inhaled, hydrofluoric acid can cause severe lung injuries, according to the Centers for Disease Control and Prevention.

The fire was extinguished on June 22, but Philadelphia Fire Commissioner Adam Thiel didn’t declare it officially “under control” until three months later.

The refinery began the process of neutralizing the hydrofluoric acid on Aug. 7, and officials say it was completed on Aug. 27. PES officially shut down on Aug. 25.

Kulinowski said the CSB recommended 100 percent inspections after a similar rupture in California seven years ago, and speaking of the Philadelphia incident, she said "this didn't need to happen."