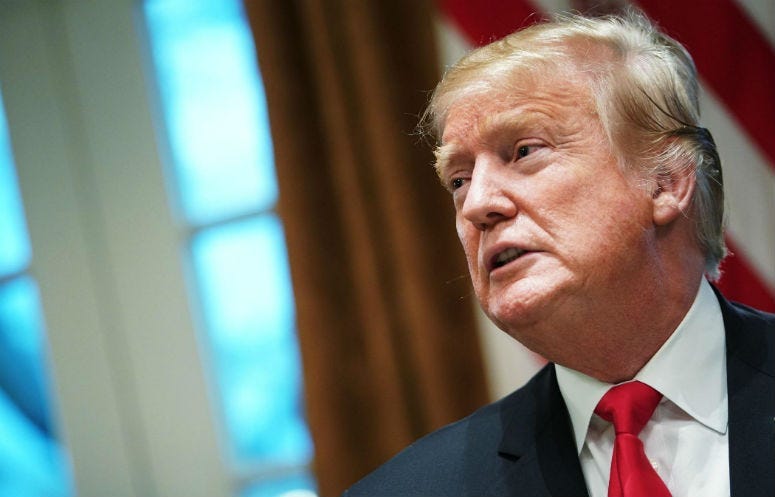 January 25, 2019 01/25/2019 5:50 pm
By Kaitlan Collins, Phil Mattingly and Kevin Liptak
(CNN) — President Donald Trump conceded Friday to mounting pressure that he reopen the federal government, agreeing to a temporary funding measure that would allow federal employees to return to work but that does not include the billions of dollars in border wall funding he's spent the past month demanding.

The outcome of the 35-day standoff leaves Trump politically chastened.

Democrats have insisted since December that he sign a measure reopening the government before they sit for talks on border wall funding. After weeks of resistance, Trump agreed to just that on Friday, rendering the past month of stalemate a futile exercise in brinkmanship that left hundreds of thousands of federal workers unpaid and anxious.

I wish people would read or listen to my words on the Border Wall. This was in no way a concession. It was taking care of millions of people who were getting badly hurt by the Shutdown with the understanding that in 21 days, if no deal is done, it’s off to the races!

With Trump's signal of support, lawmakers are moving quickly to pass spending bills that would allow shuttered federal agencies to reopen.

In his Rose Garden remarks, Trump did not appear conciliatory nor did he concede defeat; instead, he continued to paint the matter as a national security crisis and said another shutdown is possible if lawmakers cannot agree to new border wall funding.

"As everyone knows I have a very powerful alternative but I'm not going to use it at this time," Trump said after declaring he'd struck a deal to reopen government. CNN reported exclusively on Thursday that a national emergency proclamation had been drafted that would allow for potentially billions of federal dollars to be put toward wall construction.

"If we don't get a fair deal from Congress, the government will either shut down on Feb. 15 again, or I will use the powers afforded to me under the laws and the Constitution of the United States to address this emergency," Trump said. "We will have great security."

Nearly his entire Cabinet and many of his senior advisers had assembled along the Rose Garden colonnade to listen to Trump speak. They offered enthusiastic applause during his speech, which Trump opened by saying he was "very proud to announce today that we have reached a deal to end the shutdown and reopen the federal government."

The measure Trump agreed to would allow federal workers to resume being paid as Democratic and Republican lawmakers convene to discuss the administration's requests for border security funding. Trump spent the past weeks demanding that any measure reopening the government include $5.7 billion in funding for a barrier on the US-Mexico border, which was a signature campaign promise.

A deal gets struck

But amid mounting pressure from Republican lawmakers and a budding air travel meltdown, Trump yielded to Democrats' request that government be reopened before the border wall funding issue be debated. The measures being considered by Congress include no new border wall funding.

Polls have shown Trump is receiving the overwhelming blame for the shutdown. The latest Washington Post/ABC poll, released in the moments before Trump spoke on Friday, indicated 53 percent of respondents blamed Trump and the GOP for the shutdown while 34 percent blamed House Speaker Nancy Pelosi and the Democrats. About 10 percent said both are equally responsible.

.@SenSchumer & I are speaking to reporters at the Capitol now that @realDonaldTrump has agreed to end the #TrumpShutdown. https://t.co/trqjCW5oT8

The standoff was also set to deprive Trump of a key presidential privilege: the yearly State of the Union address, which Pelosi said on Thursday could not occur in the House chamber while the shutdown dragged on. Trump was unwilling to deliver the address in an alternative location; it wasn't clear Friday whether the speech would proceed after all.

The escalating political toll came as the consequences of the shutdown became more apparent. Pressure to end the shutdown increased on Friday after air traffic was delayed at two New York-area airports — LaGuardia and Newark — in addition to Philadelphia International Airport due to staffing issues at a Federal Aviation Administration regional air traffic control center.

Trump's aides, along with his outside political advisers and his allies on Capitol Hill, have worried major flight issues would amplify the blame Trump is already facing for the shutdown. They, too, believed that major disruptions to air travel would ramp up pressure to reopen the government without wall funding.

Earlier in the day, one of Trump's top allies suggested the delays could shake loose a deal.

"I think the problems at the airport are a sign of things to come and I've been ready for weeks now to reopen the government and give us a chance without a shutdown hanging over us to reach a compromise," Sen. Lindsey Graham told reporters on Friday.

A day earlier, Republican lawmakers vented their frustration at Vice President Mike Pence during a tense lunch over a lack of a strategy out of the shutdown. Trump spent much of Thursday evening and Friday on the phone with Republican leaders, who worked to convince him to end the shutdown.

The pressure increased when two competing proposals to end the deadlock failed in the Senate on Thursday. After those measures collapsed, Republican and Democratic leaders began frenzied negotiations to end the shutdown, which left 800,000 federal workers without another paycheck on Friday. That resulted in the three-week stopgap funding measure that would fund the government and allow workers to be paid.

Trump said on Thursday he would accept such a measure only if it included a "prorated down payment" on the border wall. Neither he nor his aides specified a dollar figure for the down payment, and there was no mention of the "down payment" in Friday's remarks.

Because of the President’s actions, Federal workers will be paid in the coming days.To the public servants who have worked without pay and been furloughed, we thank you. To Congress, it is time to negotiate and address the humanitarian crisis on our border once and for all.

Once the short-term measure is passed, lawmakers will return to negotiations over the money while federal workers return to their jobs. Federal workers have now gone two pay periods without paychecks. Trump said from the Rose Garden that workers, who went for weeks without pay, would receive wages soon.

"I will make sure that all employees receive their back pay very quickly or as soon as possible. It'll happen fast," Trump said.

Criticized over the course of the shutdown for appearing to lack empathy for unpaid workers, Trump on Friday offered effusive praise for the federal workforce, thanking employees for their "devotion in the face of this recent hardship."

"When I say make America great again — it could never be done without you," Trump said, calling federal workers "great people."