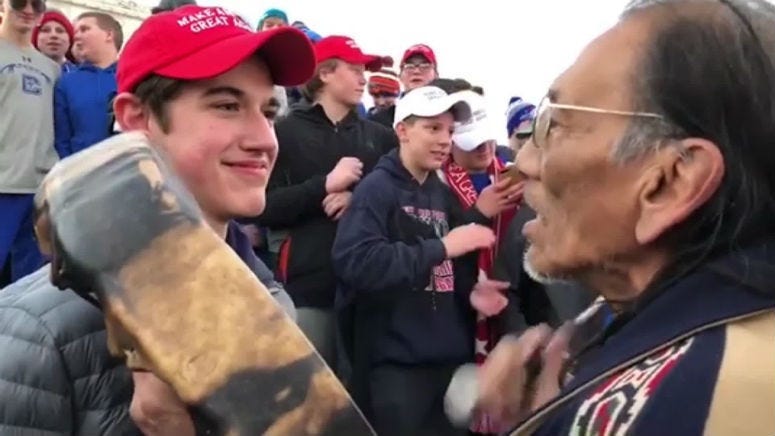 The account, with the username @2020fight, was set up in December 2016 and appeared to be the tweets of a woman named Talia living in California. "Teacher & Advocate. Fighting for 2020," its Twitter bio read. Since the beginning of this year, the account had tweeted on average 130 times a day and had more than 40,000 followers.

Late on Friday, the account posted a minute-long video showing the now-iconic confrontation between a Native American elder and the high school students, with the caption, "This MAGA loser gleefully bothering a Native American protester at the Indigenous Peoples March."

The video shared by @2020fight did not show what preceded the confrontation between the Native American elder and the high school students.

The video had been posted earlier on Instagram by someone who was at the event, but it was @2020fight's caption that helped frame the news cycle.

Rob McDonagh, an assistant editor at Storyful, a service that vets content online, was monitoring Twitter activity on Saturday morning and said the @2020fight video was the main version of the incident being shared on social media.

In one indicator of the @2020fight's video's virality, multiple newsrooms, including some national American outlets, reached out to the user asking them directly about the video.

McDonagh said he found the account suspicious due to its "high follower count, highly polarized and yet inconsistent political messaging, the unusually high rate of tweets, and the use of someone else's image in the profile photo."

Molly McKew, an information warfare researcher who saw the tweet and shared it herself on Saturday, said she later realized that a network of anonymous accounts were working to amplify the video.

Speaking about the nature of fake accounts on social media, McKew told CNN Business, "This is the new landscape: where bad actors monitor us and appropriate content that fits their needs. They know how to get it where they need to go so it amplifies naturally. And at this point, we are all conditioned to react and engage or deny in specific ways. And we all did."

Twitter's rules forbid users from creating "fake and misleading accounts," and shortly after CNN Business asked Twitter about the account, it was suspended.

CNN Business was unable to reach the person, or people, behind the account, to ask if they were indeed a California schoolteacher that chose to use someone else's picture. Soon after we pointed out on Twitter that the account was using a different woman's profile picture, the account blocked this reporter.