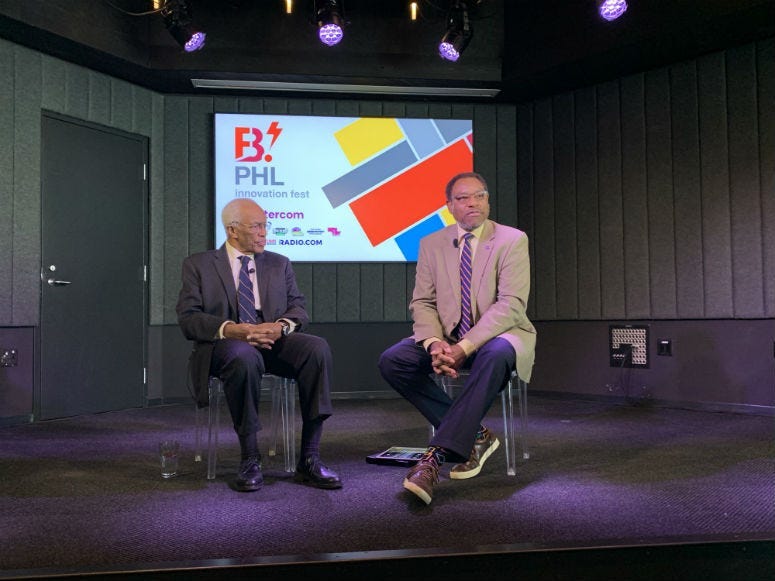 PHILADELPHIA (KYW Newsradio) —  Two superstars of Philadelphia's science scene got together to talk about space Tuesday. The conversation between astronaut Guy Bluford and astronomer Derrick Pitts was one of the events at the new B.PHL Innovation Fest, and it included the unexpected fulfillment of a childhood dream.

Before Bluford was the first African American astronaut in space, he was a West Philadelphia kid with a passion for airplanes.

Decades later, another West Philly kid attended the same elementary school when it was renamed to honor Bluford. His passion was music but he was inspired by Bluford's story and achieved his own success.

In a happy coincidence, rapper Chill Moody was also featured at the innovation festival and got the chance to reveal the connection in a surprise visit to Bluford's talk.

"In third grade we had an essay contest, and the winner would get a chance to get their letter sent to space with you," the rapper said.

Moody won and said he always hoped he'd get a chance to meet Bluford and tell him.

"You continue to be an inspiration for me and I'm sure millions of other people," he added.

Moody also wrote the signature music for the festival, which continues through Thursday.

Editor's Note: Entercom, the parent company of KYW Newsradio, is partnering with the festival organizers to host several events throughout the week.