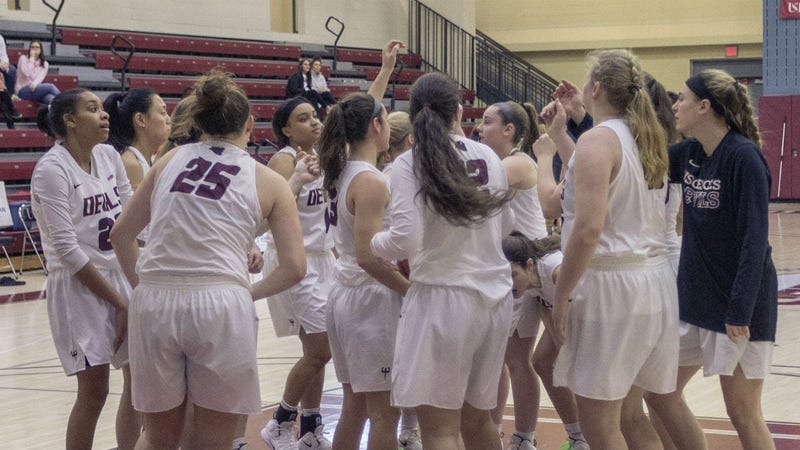 March 14, 2019 03/14/2019 5:01 pm
PHILADELPHIA (KYW Newsradio) — In what has quickly become the norm for the University of the Sciences women's basketball team, the Devils are headed to the NCAA Division II Tournament.

This is the third straight season the Devils have made the tournament field. This year, with a record of 29-2, they have earned the top seed in the East, and they will host the regional. They will take on NYIT in the first round on Friday at 5 p.m.

Jackie Hartzell coaches the Devils, and she has really turned them into a regional and even national power. Since the beginning of the 2016-17 season, she has led the Devils to an incredible overall record of 86-12, including three wins in the NCAA Tournament.

"I'm very proud of our group getting the No. 1 seed in the regional," she said. "It's a really big deal, it's a really big accomplishment for our team. We're obviously coming off a really tough loss on Sunday (in overtime to Jefferson in Central Atlantic Collegiate Conference title game), but we're hoping to bounce back and make the most of this opportunity we have."

Hartzell says getting to stay home for these games really is big.

"It definitely makes life so much easier," she said. "With our players being at such a high academic school, missing class was a concern. They didn't want to have to travel far and have to miss a lot of classes. Our spring break was last week and now we're back in class. So I think that alone, being able to stay in your routine, to go to class, sleep in your own bed, not have to travel, I think that's a huge advantage."

Sciences can shoot the three and really defend. They average about 10 triples a game and hold opponents to 54.4 points a night on just 36.4 percent shooting. The Devils are led by sophomore guard Irisa Ye and her 16.7 ppg and senior guard Alex Thomas, who pours in 14.3 points a night.

NYIT comes out of the East Coast Conference and brings a 23-8 record into the tournament.

"They're playing very, very well right now," Hartzell said. "They had some losses earlier in the year where they had a lot of players injured. They have everyone back, they just won their conference championship. They have guards who are fast, they shoot it, they have very skilled post players. They are a transition team, they're very athletic, they're very well coached. It's definitely going to be a challenge for us."

The winner of this game will get the winner of Le Moyne and St. Thomas Aquinas in the second round on Saturday.