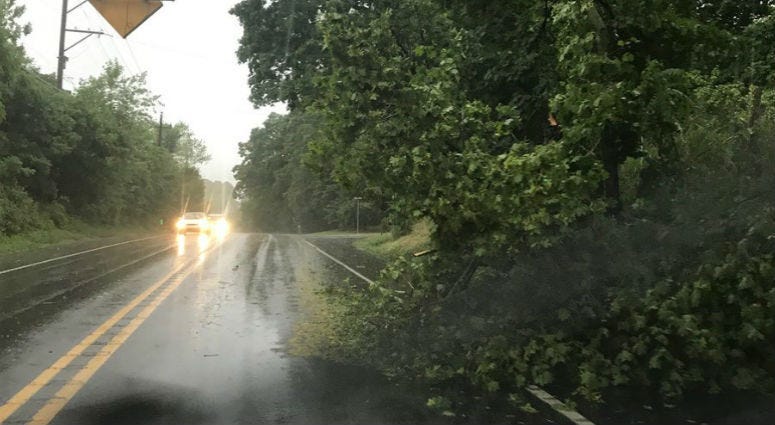 May 30, 2019 05/30/2019 1:58 am
DOYLESTOWN, Pa. (KYW Newsradio) — Wednesday night's storms caused a lot of damage and headache for residents across the Delaware Valley including in Bucks County, where they were hit hard by the fast moving storms.

Robin Fetterolf-Duckley got quite the surprise when she went to check on her business on Buckingham Pike in Doylestown following the storms.

She found that a tree had fell and crashed through the building.

"It pierced the roof, and came into the first floor, and so I have water damage and no power and I'm going to have to fix my roof," she said.

Doylestown firefighters are hard at work cleaning up the mess made by this afternoons’ storm. They say they got more than 20 calls in the last hour @KYWNewsradio #StormWatch pic.twitter.com/KuHTDO8eZV

Fetterolf-Duckley is the owner of Steely and Smith insurance and says she's happy her business was closed for the day when the storm hit.

"It could be worse. It could always be worse. Nobody got hurt," she said.

She says she's expecting things to be quite busy for her business over the next few days, and she's urging people to use this storm to make sure they have everything in order.

Firefighters in Doylestown are working to remove a tree that fell on top of a house, on Buckingham Pike @KYWNewsradio #StormWatch pic.twitter.com/eHcQfmBNtA

"Everybody needs to look at their insurance coverages, make sure they're satisfied with what they have and be safe, do what you can to keep your property safe and up to date," Fetterolf-Duckley said.

Like many other Doylestown residents, Fetterolf-Duckley could not stop speaking the praises of the fire department, which helped her clean up the mess.

Watch out for ponding and flooded areas out there. Be safe @KYWNewsradio pic.twitter.com/V6OiVw9RaT