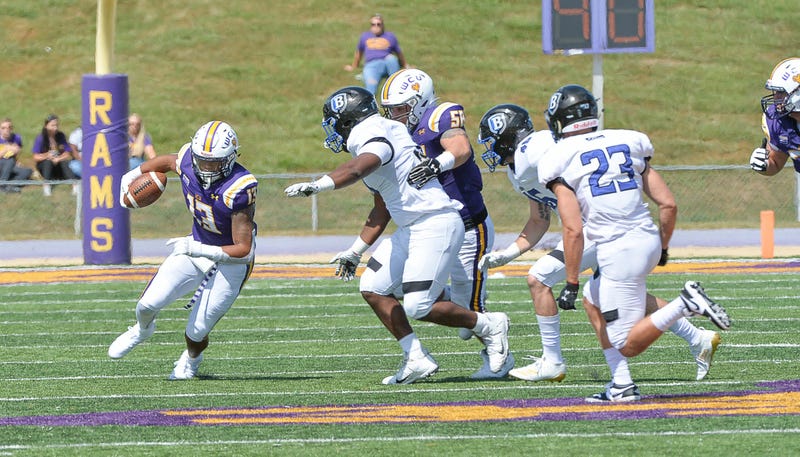 West Chester is 5-0 on the season — 2-0 in Pennsylvania State Athletic Conference East — and coming off a 29-21 road win over Shippensburg this past weekend. The Golden Rams made life much tougher for themselves than it probably had to be in this one by turning the ball over five times.

"One of the things that came out as a positive for this weekend is that we were challenged and we had to react to a bunch of adversity, and our kids did a good job with that," West Chester head coach Bill Zwaan said.

West Chester got a big game in the win over Shippensburg from redshirt freshman running back Ja'Den McKenzie. He finished with 125 yards and two scores on just 16 carries.

It was his second 100-yard game of the season, and he has at least one touchdown in every game this season. He leads the Golden Rams with 368 yards rushing and eight scores.

"Ja'Den's a big guy," Zwaan said. "He's a 6-foot-2-inch, 210-pound tailback with good enough speed. He's not a blazer, but he can run and he'll run you over. He really did a nice job finding seams and then when he got to the second level, ran through a couple tackles picking up an extra three or four yards.

"For the (one) touchdown run, he ran through two tackles, got himself in the end zone from about (30) yards out. He's really coming on. He's had a couple good games for us and I think we're going to start feeding him a lot more. We've got a couple other guys who are doing a good job for us in the backfield, but he really has stepped up and he's starting to separate himself."

Bloomsburg has been a power for years in the PSAC, but this season the Huskies have struggled. They are just 1-4 — 0-2 in PSAC East. Last week, they lost to Kutztown at home, 27-12.

"They're not the typical Bloomsburg team," Zwaan said. "They've changed their offense around a little bit, so they don't just stand there and mash you like they used to. They are doing a little bit more offensively. Defensively, they look similar. "Even though they've lost a few games, they still play pretty good defense. They don't give up a ton of points and at times their offense can just control the football and control the clock."

Last year, West Chester slipped past Bloomsburg on the road, 17-14.

Saturday's game at Farrell Stadium will kick off at noon.