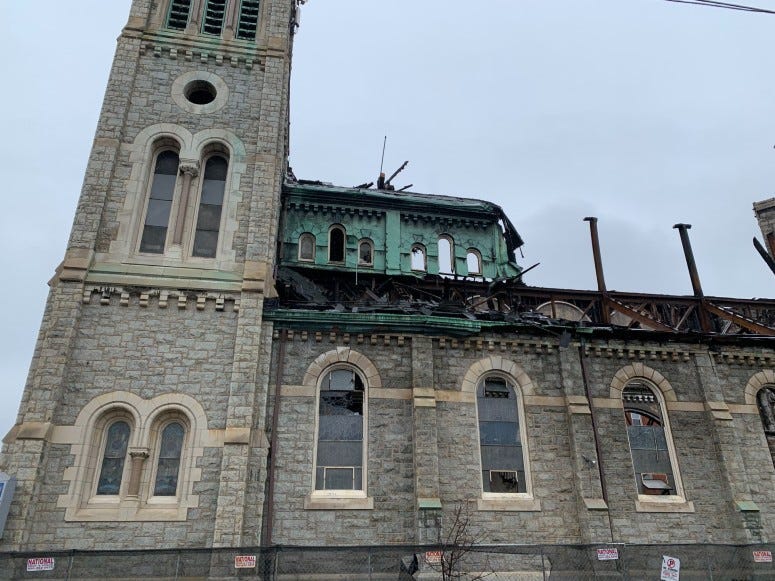 February 25, 2020 02/25/2020 11:55 pm
PHILADELPHIA (KYW Newsradio) — A historic West Philadelphia church that was gutted by a fire last summer is being torn down as the pastor and his congregation ramp up their efforts to build a new home.

Bishop Benjamin Peterson stood next to a heaping pile of masonry and charred timbers as he watched an excavator take big metallic bites out of what's left of the Greater Bible Way Temple gothic building on the corner of 52nd Street and Lancaster Avenue.

"It was best to take the building down. We're keeping the bell tower on the corner. That will remain as a landmark for the community and we have something to remember," Peterson said.

As the demolition moves forward, the pastor and his congregation are looking ahead.

They've launched a GoFundMe page with the goal of raising a million dollars to build a new church.

"People are giving and helping and sharing resources with us. Our fundraisers are going slow but are going well. I'm very proud of them and thankful for such wonderful people that I lead. And they understand what happened and they understand what's happening now, but they also have faith in what can be in the next chapter of the Greater Bible Way Temple," he said.

And he's hoping that the next chapter will begin in April when they break ground for the new building.