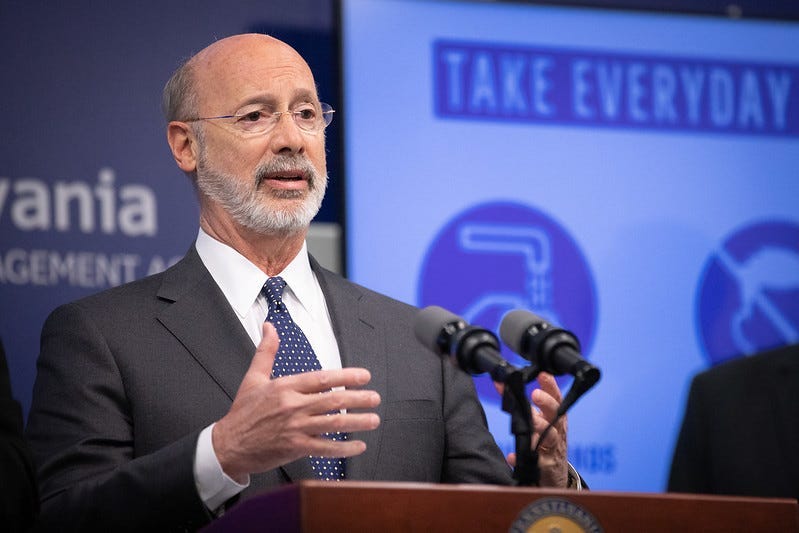 PHILADELPHIA (KYW Newsradio) — Gov. Tom Wolf’s office says it is going to appeal a federal judge’s ruling that his stay-at-home orders and limitations on the sizes of crowds — both measures enacted to limit the spread of the coronavirus — are unconstitutional.

Republicans in the General Assembly have been applauding the decision, but Wolf fired back at them on Tuesday.

“Yesterday, Harrisburg Republicans celebrated, while thousands upon thousands in our state continue to suffer, and even more worry about what this virus could bring to them and their families in the fall,” he said.

On Monday, Judge William Stickman IV sided with four western Pennsylvania counties that argued the governor’s restrictions on the sizes of gatherings violate the First Amendment, and closing non-essential businesses, while requiring Pennsylvanians to stay home, violates the 14th Amendment.

Wolf argued Pennsylvania’s quick action at the height of the pandemic prevented a strain on health systems, which other states in the region dealt with.

The governor said the federal government had “dithered.” In hindsight, he said there are some things he would have done differently, but not all.

“What is not up for debate is the early and decisive action that (Health) Secretary (Rachel) Levine, my administration, and I took early on in this pandemic saved lives,” he added. “The vast majority simply don’t buy into the conspiracy theories or fear-mongering from the president or from the Harrisburg Republicans about this virus.”

The judge noted the restrictions were initially designed to flatten the curve and protect the health care system — but since then, they’ve become open-ended and ongoing.

And, he said, while the measures were put in place with good intentions, that wasn’t enough. He added, “The liberties protected by the Constitution are not fair-weather freedoms — in place when times are good, but able to be cast aside in times of trouble.”

Republican state Sen. Tom Killion from Chester and Delaware counties is hopeful that this ruling will encourage the governor to work with the state Legislature going forward.

“You can’t have one person making decisions when we don’t even know how they’re being made, what the facts are, what the metrics are,” said Killion. “It’s just: ‘This is what we’re doing, and this is how it’s going to be.’ ”

Killion has been saying for months that the governor’s waiver system for certain businesses was applied unfairly, and he has questioned why big chains like Lowe’s and Home Depot could open, while independently owned shops were forced to close.

“It’s important we work together to make sure we can operate safely, follow CDC guidelines, and get some of these businesses open and get these folks back to work,” he added.

Senate Majority Leader Jake Corman echoed Killion, noting the judge’s ruling validates their claims of Wolf’s go-it-alone approach. He hopes the governor will come to the table to work with the General Assembly on “real solutions.”

A spokesperson from the governor’s office said the administration is disappointed in the ruling, and they’ll seek a stay, meaning the ruling would not immediately go into effect.

Wolf emphasized that the judge’s ruling is narrow and only applies to the March orders. It does not affect the state’s ongoing mask mandate, nor does it change the July order that put significant restrictions on bars and restaurants. The ruling could, however, impact his 250-person cap on outdoor gatherings and 25 for indoors.

Philadelphia officials say this ruling does not affect guidelines in the city.