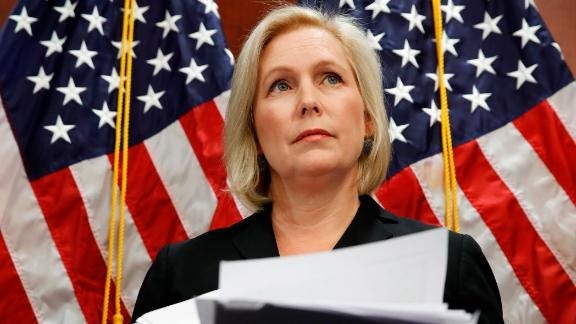 With Gillibrand and her fellow Democratic Sen. Elizabeth Warren forming exploratory committees, 2020 is the first cycle in which two women senators are running for a party's presidential nomination at the same time. Sen. Kamala Harris' probable entry will make three, with Sen. Amy Klobuchar also potentially joining the fray.

Women's pivotal role in Democratic politics has never been more evident, with multiple women from the Democratic Party likely to take the plunge into the primary, each with her own unique appeal to voters.

None of these women are at the top of the polls right now, though. All of them, however, are either at the top of our 2020 power rankings (Harris) or at least in the top ten.

Around 90% of Democrats have an opinion of the two candidates at the top of the polls, former Vice President Joe Biden and Vermont Sen. Bernie Sanders. I'm not sure that can hold as we get later into the primary process.

But once the women become better known, it's important to remember that female voters hold a powerful role in Democratic politics and were intent on choosing women as candidates in the most recent election cycles.

It's not just that women are winning. It seems that they are winning in part because Democratic voters want to vote for women. A CBS News poll taken in 2015 found that when Clinton voters were asked during the primary to give their most important reason for backing her, the second most popular answer was "it's time for a woman president." A FiveThirtyEight analysis found that even controlling for other factors, being a woman was one of the best indicators of whether a candidate won a 2018 congressional Democratic primary.

Indeed, Democratic women in particular seem to be voting for women candidates. Across the 27 caucuses and primaries in 2016 with an entrance or exit poll, Clinton beat Sanders by an average of over 20 points among women. She won women in 22 of the states and lost women in only four states. Sanders won men in a majority of contests. The more than 20-point gender gap between them was about as large as was seen between Democrats and Republicans in the 2016 and 2018 general election.

The fact that women are interested in voting for women is important because they make up a disproportionate percentage of Democratic primary voters. In 2016 for example, women made up 58% of the primary vote in the average primary. They made up just 52% of the vote in the 2018 midterm election.

You can already see the strong potential of at least a few of the women candidates among Democratic activists. I've written previously how Harris is very strong among African-American Democratic activists and those based in the early primary states. This month, Warren won a straw poll among the Democratic liberal activists that largely makeup the Daily Kos community. She doubled Bernie Sanders' percentage of the vote, even though Sanders won every straw poll taken in the 2016 campaign.

Now activist interviews and straw polls such as these aren't scientific and may not at all be predictive. They do, though, give us a window into how those who most closely follow politics are thinking.

Democratic voters look like they may want a woman to take on the man in the White House.