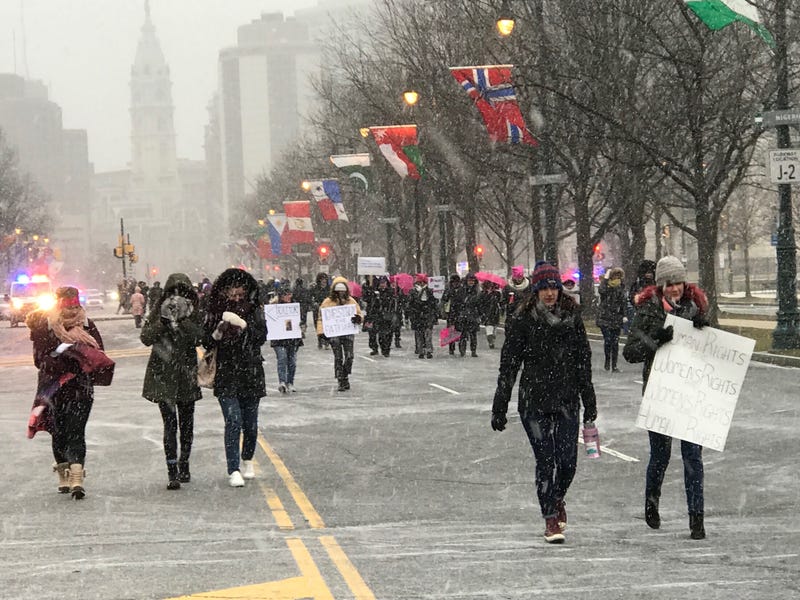 The theme of this march was "The Year of the Woman," and with this being an election year, many in attendance said voicing concerns at events like this is more important than ever.

Gabriella Sanchez of Philadelphia was marching with her dog and friends. "My parents are both immigrants and I think it is important that all of us stand together as women, as people of color, as men," she expressed, "standing together to fight in what we believe is right, definitely women having control over their bodies and not letting men dictate what we can and what we can't do."

Chris Gorman of Williamstown was also there to advocate for equal rights and bodily autonomy, for this and future generations. "I have a daughter and she's got ambitions and she needs to have a choice in her life, if something should happen to derail her, so I'm very concerned with the GOP trying to overturn Roe v. Wade."

"The good thing about the Women's March is that it's not just one city," said Erin Harrington of Bucks County. "I think it's definitely about women standing together."

The government and the big blue marble were among Karen Cohen's concerns. "They tear apart the environmental protections and make the environment worse for everyone to make a little bit of money," she said.

Many women say they noticed more men and children in this march than in years past and were glad to see the support. Jamison Warren of Fairmount was one example, marching with his wife and three-year-old daughter. He held a sign that read "Feminist Dad."

"Even if it is snowy and cold, we wanted to come out and support a good cause," Warren said. "We live in a world where we should be teaching these things to our kids from the day they are born."