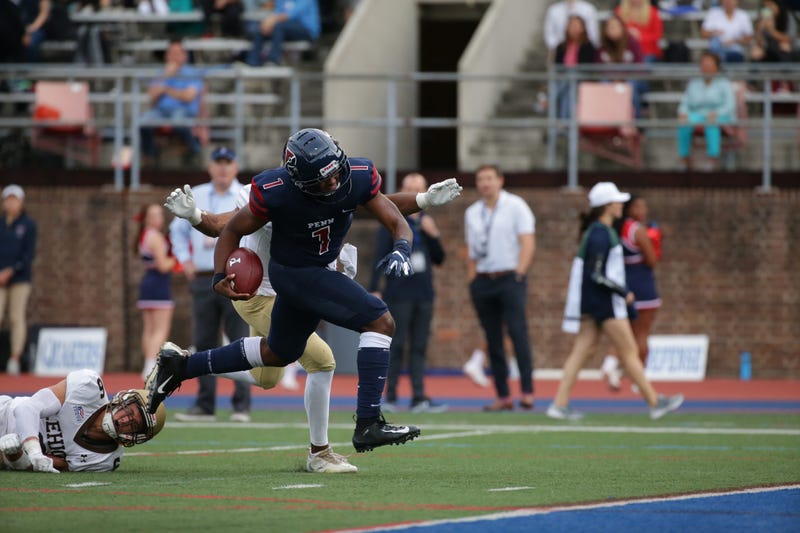 Penn will be looking for a third-straight win. This past week, they evened their record at 4-4 (2-3 in the Ivy League) with a 21-20 home victory over Cornell. Penn made a lot of big plays at key times in that game, but the biggest was from freshman cornerback Kendren Smith, who broke up a Cornell 2-point conversion attempt that would've given the Big Red the lead with just 50 seconds remaining.

“It was really great to see the resolve of our kids,” said Penn head coach Ray Priore. “Playing for all four quarters to the bitter end, but different guys stepped up at different times to make plays on the day.”

Penn really did make contributions from up and down the roster in the win against Cornell. They actually had three different players throw touchdown passes to three different receivers.

Nick Robinson started at quarterback and threw the first touchdown of the day, a 12-yard, second-quarter strike to Rory Starkey Jr. Then, back-up quarterback Ryan Glover hit Kolton Huber from 40 yards out to tie the game at 14 in the third quarter. Penn scored it's final touchdown in the fourth quarter when Glover threw a lateral to reserve wide receiver Owen Goldsberry, who then went deep downfield on an 80-yard touchdown pass to Eric Markes.

Glover was especially effective during his stretch at quarterback in the game, finishing five of six, throwing the football for 69 yards and that score.

“It was great by Ryan, but Nick has given everything he has all year long,” Priore noted. “He has played with some injuries — lower and upper body injuries — and he's a warrior. But to have Ryan come in, in the fashion he did on Saturday, that was by design. He came in, we had set a plan for Ryan to be part of things, each week we do have a plan. He came in and executed his portion of it, and it was great to see the results.”

Robinson is expected to be back in the saddle Saturday against Harvard, which is 4-4 overall and 2-3 in the Ivy League.

The Crimson have lost three in a row, the last two in truly excruciating fashion. Two weeks ago, it looked like they were going to end Dartmouth's dreams of an undefeated season, when the Big Green scored a game-winning touchdown on a Hail Mary pass as time expired. Then last week, Harvard lost in overtime to Columbia in New York City.

“They have some really, really good weapons on offense. Their tailbacks, their receivers, they have a ton of tight ends there, play very stout defense. So it's always a battle, and we look forward to heading up this weekend.”

Saturday's game in Cambridge will get underway at noon.