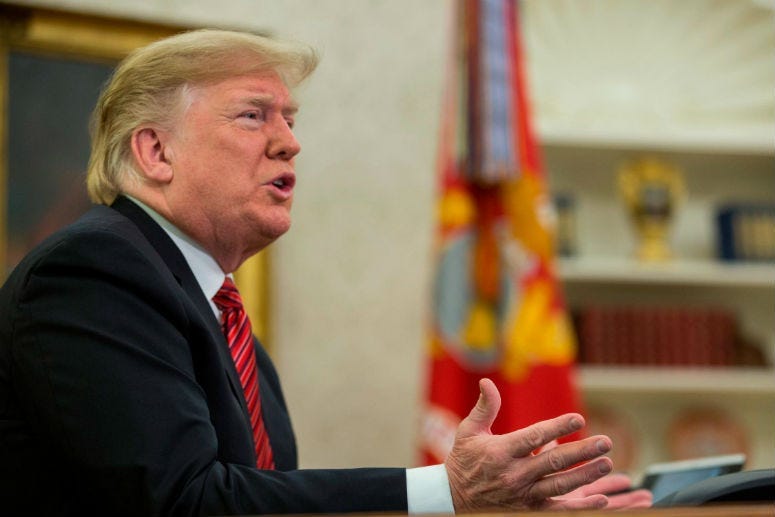 January 9, 2019 01/09/2019 2:15 am
By Kevin Liptak, CNN
(CNN) -- President Donald Trump opened his first Oval Office address to the nation warning of "a growing humanitarian and security crisis at our southern border," one that most experts say is at odds with facts.

Speaking from behind the Resolute Desk, Trump said the US could no longer accommodate immigrants who enter the country illegally.

'We are out of space to hold them and we have no way to promptly return them back home to their country," Trump said.

"All Americans are hurt by uncontrolled illegal migration," Trump said. "It strains public resources and drives down jobs and wages."

After weeks of a partial government shutdown, Trump and his negotiators have made little headway in convincing Democrats a barrier is needed before agencies can reopen and federal workers can begin receiving paychecks again.

The administration has steadfastly refused to take steps that would restore funding to some agencies, believing the shutdown is its best leverage to secure the wall funds. Fearing he could lose a messaging battle as more Americans feel the pain of a shuttered government, Trump escalated his warnings that the country is unsafe without the border wall he promised as a candidate.

In making his case, Trump turned for the first time to one of the most recognizable symbols of the American presidency -- an eight-minute direct-to-camera evening address from the Oval Office. He will continue his push in the following days, meeting with Republican senators during their weekly lunch on Wednesday. On Thursday he'll pay a visit to the Texas border town of McAllen. Trump, however, will address Americans suffering a credibility lapse after he and his aides have repeated multiple false claims about immigration.

Whether the authoritative setting will convince more Americans there truly is a security crisis at the southern border remains an open question. Facts undercut the administration's portrait of a nation under siege by terrorists and criminals crossing the southern border; in July 2017, the State Department said there was "no credible information that any member of a terrorist group has traveled through Mexico to gain access to the United States."

The administration's own figures show vastly more known or suspected terrorists were apprehended at airports.

Trump and top White House officials have in recent days begun speaking more about the humanitarian crisis at the border, which Democrats say is real but of the administration's own making. A surge of families seeking asylum has strained health and child care facilities, and two children have died in US custody.

In the lead-up to the address, the President and his advisers made a public show of considering a national emergency declaration to secure funding for the border wall, a drastic step that would surely be challenged in court. Vice President Mike Pence refused in a string of morning television appearances to say whether a declaration would come during the evening speech.

The White House counsel's office continues to deliberate on the legality of the step, but multiple people familiar with the matter said Trump was not expected to announce a national emergency in his speech on Tuesday.

Still, Trump has been under pressure from informal advisers and allies to take the step, and no official could rule out a last-minute change of heart.

A source close to Trump told CNN's Jim Acosta on Tuesday that the President has been working the phones seeking advice from friends and aides in recent days about whether he should declare an emergency at the border in order to secure funding for the wall. The source said Trump has been told by several of his allies and advisers that a declaration "probably won't work" from a legal standpoint, though hasn't ruled one out entirely.

Another adviser to Trump said the President has been receiving advice telling him he should declare the state of emergency so he has something to sell to his base -- and that if the step is held up in the courts, Trump can still say he tried.

Aides suggested the President would rely on arguments he's made previously to ratchet up the urgency of his message. The White House expects more Americans will hear the speech because it's being delivered in television prime time.

A White House official who has read an early draft of the speech says it contains anecdotes about families affected by illegal immigration and cites statistics designed to justify Trump's demands for a border barrier and the now-18-day government shutdown.

"The case is fairly easy to make if people know the statistics," said the official, despite acknowledging Trump's critics are likely to dismiss at least some of the numbers in the speech as lacking context.

The draft also calls for Democrats to "stop playing politics" and to work with the administration by prioritizing border security over other spending, though the official says attacks on the left were not a focus of the current draft.

"I think the President's going to bring his case directly to the American people," Trump's senior counselor Kellyanne Conway told reporters on Tuesday afternoon. "He also needs to cut out the middle man because there's a lot of misstatement and lies told about him every day. And so he needs to make sure he gets his message to the American people. A lot of this will strike the public as new information."

Midday on Tuesday, Trump was working closely with top aides, including policy adviser Stephen Miller, on drafts of the speech.

Democrats will have a chance to rebut the President in a subsequent address; all the television networks that agreed to air Trump's remarks also agreed to air Democrats' response, delivered jointly by House Speaker Nancy Pelosi and Senate Democratic leader Chuck Schumer.

Pelosi and Schumer, along with other Democratic and Republican leaders, will return to the White House on Wednesday to resume talks, though it wasn't yet clear whether either side would come offering new elements of a compromise.

Trump chose to deliver the address after weekend talks between administration officials and Democrats failed to generate a deal that could reopen the parts of government closed by the shutdown.

The closures have become more apparent this week, as more Americans return from holiday vacations to find some federal services unavailable. Most federal workers affected by the shutdown were due to receive paychecks on Friday; without an agreement, they won't be paid.

Trump has insisted in public that unpaid workers are understanding in their plight, and that he feels their pain.

But in private, the President has worried an extended shutdown could erode his political support as more Americans feel the effects. Yet he's also fretted that failing to deliver on the border wall -- his chief campaign vow -- would hurt him with his conservative base.