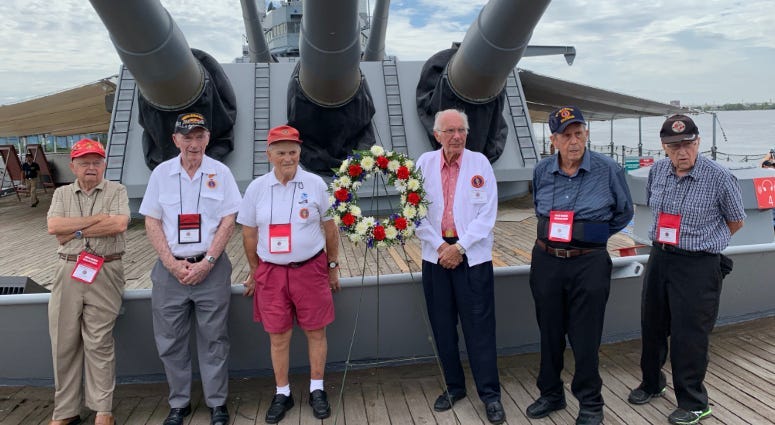 PHILADELPHIA (KYW Newsradio) — For the men of the Sixth Marine Division, loss has long been a part of their stories.

Even in their greatest victory — taking Okinawa in a battle that lasted from April 1 to May 18, 1945 — they lost more than half their comrades-in-arms.

The years since have claimed most of the survivors.

So the annual reunion of the "Striking Sixth," held in Philadelphia this year for the first time, is a testament to fortitude, resilience and survival.

"It's just good comradeship," said Dean McCallum, who once fired mortars into the caves where the Japanese hid on Okinawa. "We're so honored that America loves us and honors us. It's a great communion."

McCallum was one of the six Okinawa veterans to make it to the reunion, though dozens of family members — called "lineals" by the organizers — have filled out the ranks of the departed.

The president of the board, Connie Houseweart, is the daughter of a Sixth Marine.

"Since my father died in 2006, I promised that I would commemorate him every year," she said. "So I have."

She received help this year from author Buzz Bissinger, who discovered, while writing a book about the division, that his father served with them.

"They symbolize the best of us and when they're all gone, I don't know what there's going to be to replace them," Bissinger added.

More than 16 million served in World War II, but less than 500,000 are still alive — a number that is quickly dwindling.

The Department of Veterans Affairs estimates more than 300 veterans die every day.

At 92, McCallum is among the youngest. He was just 17 when he enlisted. He could not have know what he would face: a Japanese suicide mission to take as many Allied troops as possible with them to the grave.

It was the longest, largest, deadliest battle of the Pacific yet. And he finds that most Americans know nothing about it.

"FDR died while we were fighting on Okinawa," McCallum recalled. "There was VE (Victory over the Enemy) day in Europe, so that distracted from what we were engaged in, but peace in Europe didn't mean anything to us. We had a problem to solve."

Like his comrades, McCallum has learned more about the battle in the years following his service than when he was in the thick of it.

He described what he discovered after the fact:

"At 8 a.m. on April Fools' Day, Easter Sunday, 1945, there's 8 miles of marines and soldiers landing. We were prepared. There was naval gunfire ahead and when the naval guns stopped firing, then the airplanes came in and strafed. Then we went in and we were unopposed. The Imperial Army took a new tactic. They were in defensive positions. They let us land. They knew they were going to lose but they were going to kill 10 marines or soldiers for everyone one of them they lost. They were in caves and spider holes and we had to dig them out."

McCallum was a mortar man, firing hundreds and hundreds of rounds.

Then, he took one.

But he calls it his "million-dollar" wound because it was like hitting the jackpot: "I got to go home and see my mother."

While serving as an intelligence observer, Les Wells searched the conquered caves and spider holes for information that could aid the Allied effort. He was not supposed to fire except in self-defense. But he learned his brother, a soldier, had died in the battle on Okinawa.

"When I got word that my brother had passed away, I got in a few licks here and there. I don't know if I hit anything," he chuckled. He still has the Distinguished Service Cross and the Bronze Star his brother was awarded posthumously.

Once Okinawa was taken, Wells was sent to Tsing Tao, China, to prepare to invade Japan. It never happened.

"We were working on an officers' club and somebody came over and said, 'The war's over,' " he laughed. "The officers said, 'Keep working. You signed up for duration plus six.' "

Wells has attended these reunions for many years, to get together with the men from his outfit. There were 18 the first time he went. He is the last of them.

He hasn't gone in a few years, but as a local Langhorne resident, he's glad he did. It's given him some perspective.

"We didn't think about it at the time, but as you get older, it makes you a little proud that you were able to do something," he said, his voice breaking. He took a long pause. "I get a little choked up."

This is only the second reunion for Leonard Turner. At 96, he's the senior member of the group — though his 98-year-old brother was on Okinawa, too.

He was a "raider," the forerunner of the Marines special ops fighters. Once he got home, he never spoke of his service. He still doesn't.

"I remember the friendships we made as fighting comrades," he said when asked about his recollections.

But his daughter, Dr. Karen Turner, discovered his role on Okinawa almost by accident through a Google search.

"It's really a good thing," her father said. "Being my age, I'm happy to meet anybody that knew me."

The men spoke during a tour of the Battleship New Jersey, one of several activities planned for their stay in the city that was the birthplace of the Marine Corps. While staying at the Loews Philadelphia Hotels, they'll also visit historic sites and the Museum of the American Revolution.

If you see them around town, you might want to thank them for their service. You wouldn't want to miss your chance.

For more stories on veterans of World War II, watch, listen and read KYW Newsradio's original series D-Day: 75 Years Later, featuring interviews with veterans in honor of the 75th anniversary of the historic invasion of Normandy.