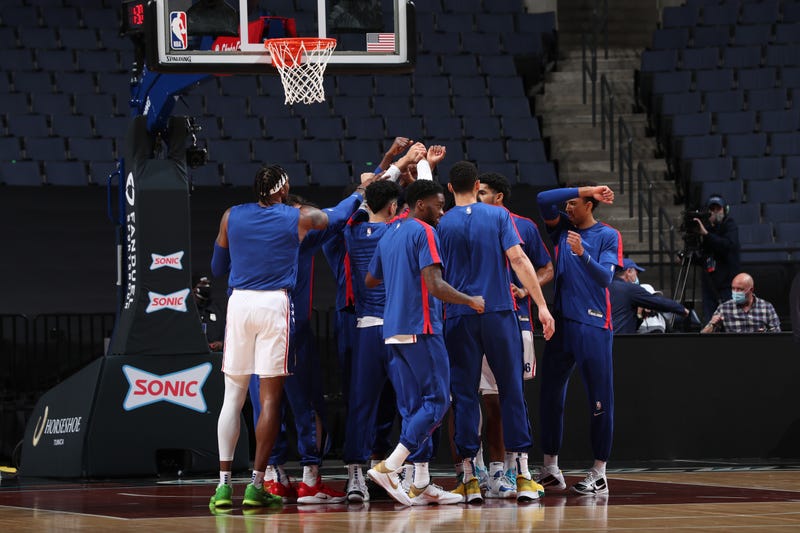 The Philadelphia 76ers huddle up during the game against the Memphis Grizzlies on Jan. 16, 2021. A day later, their game against the Thunder was postponed due to contact tracing. Photo credit Joe Murphy/NBAE via Getty Images
By Dave Uram KYW Newsradio

About 90 minutes before the 76ers were supposed to take on the Thunder in Oklahoma City, the NBA said the game had to be postponed because the Sixers didn’t have the league-required minimum of eight players available due to ongoing contact tracing.

Per a team source, the Sixers have no new positives to report at this time.

There is ongoing contact tracing because of a COVID-related issue involving a recent opponent. https://t.co/MYWbsZUnQH

It appeared to be a sudden announcement — only minutes prior, the NBA posted its official 5:30 p.m. league-wide injury report, which teams are supposed to submit by 5 p.m. local time. The Sixers listed the following players as out: Joel Embiid for right knee pain, Mike Scott for right knee swelling, Seth Curry for health and safety protocols after testing positive for COVID-19 on Jan. 7, and Vincent Poirier for health and safety protocols.

Video shows some Sixers players on the court, going through what looked like a normal pregame shoot around warmup, before being asked to exit the floor.

This is pregame when Sixers were told to leave the court pic.twitter.com/WUVxBehD5I

A team source told KYW Newsradio Sunday night that there was ongoing contact tracing because of a COVID-19-related issue involving a recent opponent.

ESPN’s Adrian Wojnarowski reported that the opponent was the Memphis Grizzlies, who the Sixers lost to Saturday night 106-104.

The Sixers postponement is due to contact tracing connected with the game against the Grizzlies on Saturday night, sources tell ESPN.

The Grizzlies reported that center Jonas Valančiūnas was ruled out for their game Monday against the Phoenix Suns due to “health and safety protocols.” It’s not clear if Valančiūnas’ situation is why the Sixers went into the contact tracing process.

The Sixers stayed overnight in Oklahoma City, but a team official said they left on Monday. Their next scheduled game is Wednesday night at the Wells Fargo Center against the Boston Celtics. Playing statuses for the players will be updated Tuesday, according to the team official.

A team source said early Monday afternoon that there were no new positive cases of COVID-19 to report, at that time.

While this is the Sixers’ first postponement of the season, it’s not their first experience with contact tracing. Curry tested positive for the virus earlier this month, leading the team to quarantine overnight in New York after losing to the Brooklyn Nets. As a result, Tobias Harris, Shake Milton and Matisse Thybulle missed the next three games.

Poirier has missed four games in a row, and it would have been five if the NBA didn’t postpone the Thunder game. Curry’s positive test forced him to miss those games as well. 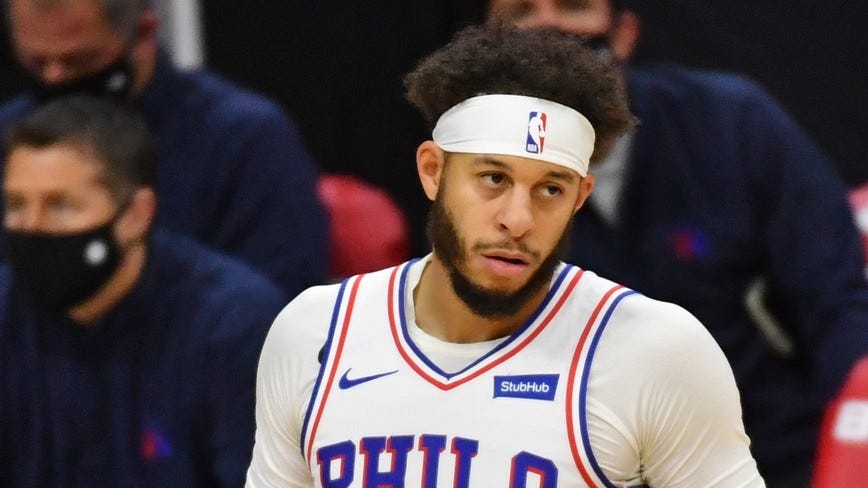 Embiid: Sixers shouldn't have played while roster was so ravaged by COVID-19 protocols

The Sixers are the 19th team to have at least one postponement this season. There are 30 teams in the NBA.

Sunday night’s postponement was also the 14th this season for the NBA, 13 of which have happened since Jan. 10. The league only had one postponement between Dec. 22 and Jan. 9.

Before the season began, the NBA released only half of every team’s 72-game schedule, anticipating postponements for the second half. There is no indication that the NBA plans on pausing its season. In fact, the league has said it expected these types of obstacles.