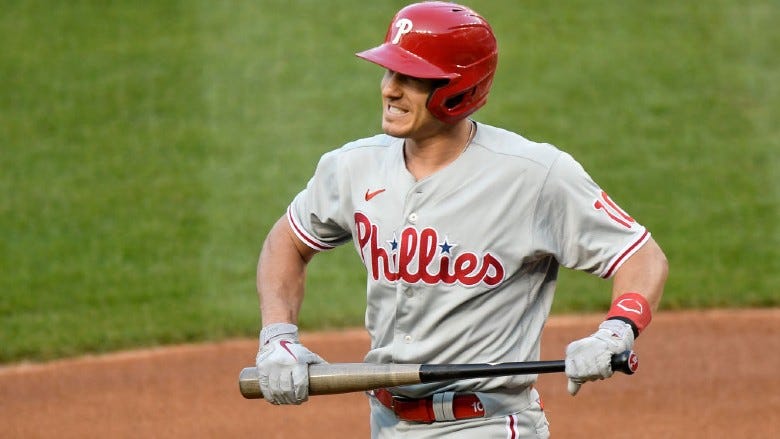 PHILADELPHIA (KYW Newsradio) — J.T. Realmuto may have played his final game in Phillies red on Sunday when the Phils failed to make the postseason again thanks to another September collapse. But, if Bryce Harper’s hopes and desires come to fruition, Realmuto will be back to try to help this club end its now nine-year playoff drought.

“J.T. Realmuto needs to be our catcher next year,” Harper said after the season finale. “Plain and simple.”

Bryce Harper after Sunday's season finale about how much the #Phillies need to bring back J.T. Realmuto. KYW Newsradio

Since Realmuto is arguably the best at his position, he’ll likely cost top dollar on the market this offseason with other teams — and ones the Phils are familiar with — bidding for his services.

“There’s gonna be two teams or three teams in the NL East that are gonna go after that guy, and if that happens, that’s gonna be tough to swallow for us,” Harper added.

It’s not just Realmuto the Phillies are potentially losing.

Shortstop Didi Gregorius was playing on a one-year deal. There is also the historically bad bullpen the Phils need to fix for next season.

Realmuto has been an important member of the Phils the last two seasons after Matt Klentak acquired the catcher in a trade with the Marlins that included sending pitching prospect Sixto Sánchez to Miami.

The 22-year-old Sánchez has shown the type of potential he possesses and can be a problem when the Phils face the rival Marlins for years to come.

Earlier this month, when asked if there is any added pressure to bring Realmuto back considering the way Sánchez has performed, Klentak said, “We would love to have J.T. here, but when you make that trade, you’re trading for two years of control, and you know that. Sixto looked really good against us. He’s looked good this year, but we’ve had two very productive years of J.T. as well.”

Klentak’s job security has been a topic of conversation lately.

This was his fifth season as Phillies general manager, and none of them featured winning records — even though the Phils were expected to compete the past two years.

For as direct as Harper was about Realmuto remaining a Phillie, when asked if he would like to see Klentak return next season, Harper said, “I mean I’m not an owner, so I’m glad I don’t have to make those decisions."

Bryce Harper was asked whether #Phillies GM Matt Klentak should be back next season. KYW Newsradio

With an expanded playoff field — eight teams instead of five — Klentak’s Phillies were expected to make the postseason. They didn’t after going 13-17 in September, losing 17 of their last 26 games, including seven of their final eight.

“We were streaky, and we happened to finish on a bad streak,” Manager Joe Girardi said after getting swept by the Tampa Bay Rays 5-0 on Sunday.

The Phils went from threatening Atlanta for the National League East crown to falling out of second place in the division in favor of the Marlins, to dropping out of one of the two Wild Card spots. But, they still had a chance to back their way into the postseason on Sunday.

If they beat the Rays — who were playing for nothing since they had the top seed in the American League locked up — with their ace, Aaron Nola on the mound, and St. Louis beat Milwaukee while San Diego defeated San Francisco, they would’ve made the postseason.

But, they lost and failed to capitalize on golden help from those other teams.

“The hard things we needed to get done today, they got done,” Harper said. “The easy thing of winning, we just didn’t get it done.”

Girardi indicated an “OK streak” would’ve helped the Phils play into October. That was all they needed.

Instead, it’s nine straight years without playoff baseball for the Phils, and questions about Klentak’s future.