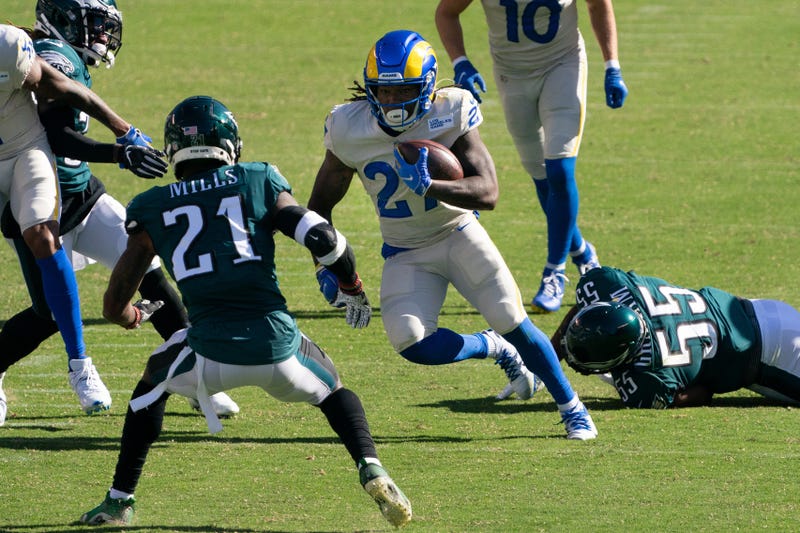 PHILADELPHIA (KYW Newsradio) — It’s been a little while since the Eagles began a season 0-2. Chip Kelly was the head coach at the time, and the pope was about to visit Philadelphia.

The Eagles' 37-19 loss to the Los Angeles Rams on Sunday was the first time in Doug Pederson’s tenure as head coach they’ve opened a season this poorly — and two people who have been covering this team for a very long time both had negative reactions.

“Concerned, with a capital C,” SportsRadio 94WIP’s Ray Didinger said to describe the current status of the team.

"Concerned" is better than "panicked."

Longtime voice of the Eagles Merrill Reese said he doesn’t panic after two games. But he agrees: "It was a terrible Eagles performance." There are many reasons the Rams went up 18 points early and never looked back, even though the Eagles shrunk the deficit to within five twice. They’re the same reasons the Eagles couldn’t go ahead despite indications momentum was in their favor.

The easy target: No. 11. quarterback Carson Wentz and Pederson are usually going to get a lot of the blame, especially if the offense turns the ball over and fails to capitalize in key situations.

“I’m concerned (about Carson),” Reese said. “I’m concerned any time this team is 0-2. Carson is a guy who went down the stretch last year in the last four games making the right play at the right time, isn’t finishing. He did have some good stretches. But, when the game was on the line and he had to thread the football in there, or throw it away, he made the wrong decision.”

However Reese, similar to Didinger, believes the defense — which allowed the Rams to rush for 191 yards and Jared Goff to throw for 267 yards and three touchdowns on 20-27 passing — played a big part in the final outcome as well.

Didinger doesn’t believe the Eagles should turn to rookie second-round pick Jalen Hurts if Wentz continues to struggle with inaccuracy. He says that would be an unfair spot for Hurts to be thrown into, since there was an abbreviated training camp and no preseason games. He also thinks if they were, for some reason, going to play Hurts over Wentz, it would be difficult to go back to Wentz.

“If you make the move to a rookie quarterback right now, then you’re just opening the door to utter chaos,” Didinger said.

Didinger believes the Eagles need to a find a way to get Wentz past these struggles where he’s turning the ball over and missing receivers. That being said, even if they do fix Wentz — for a lack of better words — that’s not the only puzzle to solve.

“If the defense — and in particular the defensive line — doesn’t play better than they played yesterday, then it’s almost not gonna matter, because in yesterday’s game they were basically just non competitive,” he said. Heading into this past Sunday’s game against the Rams, Didinger called it a “must-win” with a lowercase "M." The 0-2 Cincinnati Bengals are coming to town next week.

Does “must-win” become all-caps from Didinger’s perspective — especially with a tougher part of the schedule coming up?

“It’s all in capital letters, and it’s italicized.”

It may not be time to panic yet, according to Pederson.

“The mistakes we're making are devastating mistakes,” he admitted. “I understand that, but there's a lot of good out there, too, and there's a lot of positive that we can build on and we're not far off.”

Just how far off are they? It appears there is a lot of ground to make up. The defense has now given up 57 points over the past six quarters.

Then there is the offense, where Wentz continues to struggle. Pederson believes Wentz has to put less on his shoulders and rely on the rest of his teammates for help as he looks to cut down on his mistakes.

“I just don't want Carson to feel like he has to make all the plays every single time,” Pederson said. “I want him to just be Carson — and you guys know him, you've been around him, you've heard him, his demeanor. He wants to do everything right and we've given him control to do that, but we just have to continue to work to get better.”

The Eagles have time to correct their mistakes with 14 games remaining, but the bigger question this season is if the Eagles are capable of fixing their problems. If not, they could be outside looking in come playoff time — for the first time in four years.

It's up to Pederson and his players to find out.

“Those guys in that locker room are mad,” he added. “They are upset that we're 0-2 and in this position, but nobody's going to feel sorry for the Philadelphia Eagles or feel sorry for me.​”

To listen to the full Merrill Reese and Ray Didinger interviews, subscribe to the KYW Sports Pod through the RADIO.COM app or wherever you get podcasts.