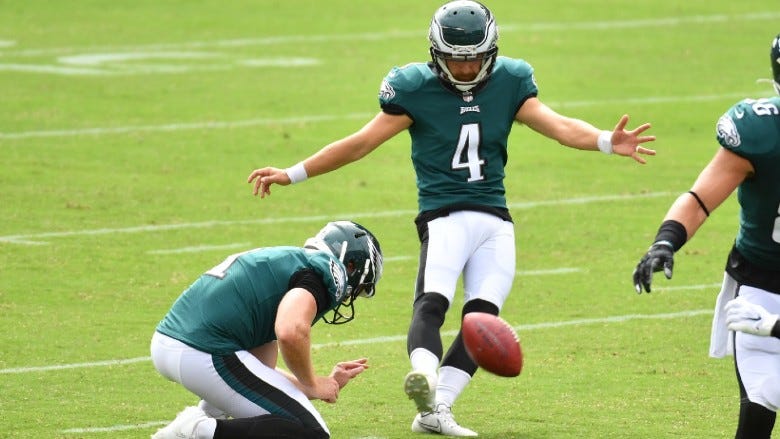 PHILADELPHIA (KYW Newsradio) — The Eagles hit the practice field Wednesday in preparation for the 49ers. However, they’re going to be without a key player for at least three weeks.

The end of overtime in their game against the Bengals was still a topic Tuesday.

"Now, if you’re asking me what’s the furthest he can kick the ball from? I mean, I don’t totally know the answer to that question, only because you would have to tell me what the conditions are, and the wind, and the weather, the temperature, density, altitude," Fipp said. "I mean, all that stuff plays a factor in how the ball carries."

Elliott drilled a legendary 61-yard game winning field goal in 2017 that set the tone for the Eagles Super Bowl season.

Fipp explained that head coach Doug Pederson is in a difficult position, having to balance all the factors in a short period of time. But Fipp did take full responsibility for Matt Pryor’s 5-yard false start penalty, which pushed the kick out to 64 yards instead of 59.

Some fans believe the season may already be over, especially with games against San Francisco, Pittsburgh and Baltimore over the next three weeks.

Quarterback Carson Wentz said this is hardly uncharted territory for himself and for his teammates.

"It's not the start we wanted," said Wentz. "We’ve faced adversity really in some way, shape or form every year,”

But the frustration of the start to this season was evident in the words of Pederson, who is well aware of the emotions the Eagles bring out of their fans.  During these tough times, Pederson knows things have to turn around quickly and insists he understands the frustrations of Eagles Nation.

"Nobody's satisfied with where we are," Pederson said. “I mean, even if we were 3-0, (the media) wouldn't be satisfied. We're still working every single day to get better. We have some new faces that are going to be playing, particularly at the skill positions now.  My concern is about the guys in the locker room."

Each week, the Eagles insist they are close to cleaning up their mistakes and getting back into contention.

Only their second game against the Rams was a blowout loss, and Los Angeles was only up by five in the third quarter before putting the game away.

Wentz continues to maintain his belief that only a few mistakes are holding the Eagles offense back from a breakout performance.

"We’re really not far off offensively," said Wentz. "We’ve done some good things. We’ve had some miscommunication things, some issues. They’re all correctable things and things we can get going in the right way, and I’m confident that we will."

The Eagles will face a San Francisco squad that reached the Super Bowl last season.  However, the 49ers are dealing with a host of injuries and appear a bit more vulnerable even after a convincing win last Sunday over the Giants.

Pederson knows there is nothing more he can do than try to prepare his players as best as he can and hope the Eagles return to their winning ways.

"We have played three games," Pederson said. "Hasn't been our best. We're excited about this opportunity, it's another week to get better as a team.”