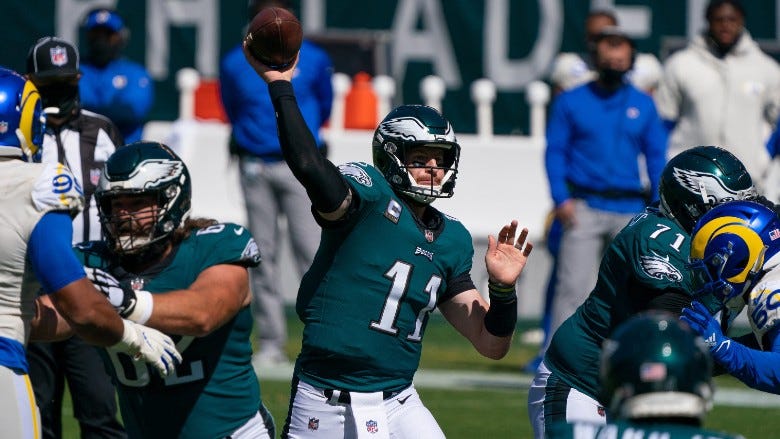 PHILADELPHIA (KYW Newsradio) — Usually, a nonconference game in Week 3 of the NFL season isn't a game that can save a season. However, the 0-2 Eagles are arguably facing this scenario on Sunday, when they battle the 0-2 Bengals at the Linc.

There will be 13 more regular season games after Sunday's contest, but there is the inescapable feeling the 2020 campaign is teetering on the brink.

The Eagles were beaten handily by the Rams a week ago and blew a 17-point lead against Washington in Week 1.

After the Bengals, the Eagles will play the 49ers, the Steelers and the Ravens.

A loss to struggling Cincinnati would be a huge blow for any hopes of turning the season around.

However, coach Doug Pederson is happy with how his players have responded in practice this week.

"They have responded extremely well," said Pederson. "Wednesday was a really good practice. Very, very energetic upbeat practice. That's one thing I love about this team this year is these guys understand that good football teams can't continue to make the mistakes we're making."

The Bengals are also looking to turn their season around, although less was expected from a rebuilding Cincinnati squad than from an Eagles team hoping to repeat as NFC East champions.

The Bengals offense will be directed by rookie quarterback Joe Burrow, the first overall draft pick in this year's draft.

Pederson has been impressed with what he has seen from Burrow over the first two weeks of the season.

Carson Wentz is hoping to bounce back from a shaky start to the season, but the quarterback will be a bit more limited as far as options on offense.

First round draft choice Jalen Reagor will be out for several weeks with a thumb injury, and veteran Alshon Jeffery isn't ready to return.

Jeffery was back at practice on Thursday for the first time since suffering a foot injury in December. However, Pederson said Jeffery needs more time on the practice field.

"I'm optimistic moving forward in the next couple weeks," said Pederson. "It just depends on how he does. You put a guy that's had an injury out there, you want to test it, you want to see where he's at. But it's all about today, the day after, 24 hours, how he recovers and being able to do some more with him."

As the Eagles look to notch their first victory, Pederson and his staff continue to take proper safety precautions. Several coaches have received heavy fines by the league for not wearing their masks of face shields properly.

Pederson is experimenting with several different styles of face wear but said he will continue to follow the guidelines put in place due to the pandemic.

"I haven't made a decision yet," Pederson said. "Still working through a couple of face shields and masks right now, but I will have something on my face for sure."