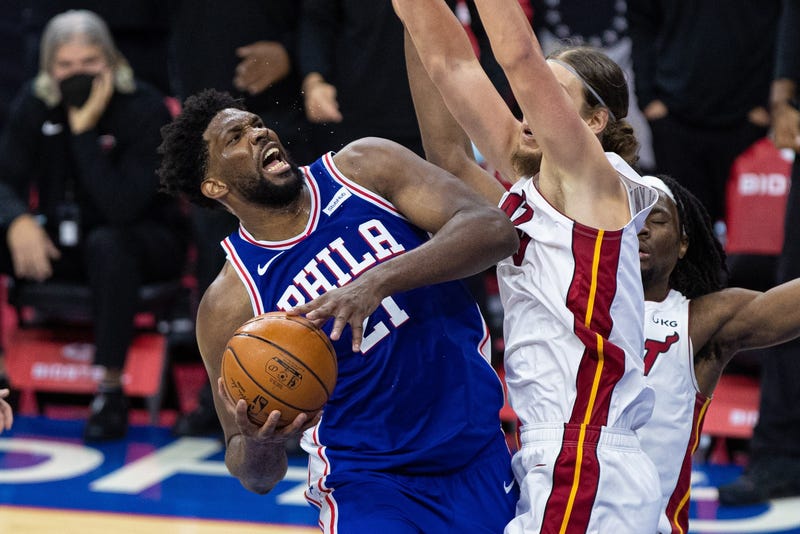 PHILADELPHIA (KYW Newsradio) -- Sixers center Joel Embiid got right to the point after Tuesday night's win, when he was asked if his team should have played their most recent games, shorthanded as they are by NBA health and safety protocols since Seth Curry's positive COVID-19 test.

The Sixers had just snapped a three-game losing streak -- with Embiid willing the team, as coach Doc Rivers put it, to a thrilling 137-134 overtime victory -- with 45 points, 16 rebounds, five steals and four assists.

Thin rosters have become a new normal as the season enters its fourth week. Miami was even worse off than the Sixers on Tuesday night, with the NBA-required minimum of eight players.

The NBA has postponed some games as a result, but not for the Sixers -- most notably, on Saturday, when they put injured forward Mike Scott in uniform to reach the eight-man threshold.

As of Wednesday morning, why that game was allowed to happen was still a mystery. With a knee contusion, Scott wasn’t supposed to be "available." Add to that injuries for Embiid, Ben Simmons and Furkan Korkmaz; personal reasons for Terrance Ferguson; and Curry's diagnosis -- plus four knocked out because of contact tracing -- and the Sixers were left with seven players on Saturday.

"It just seems like every other (NBA) game keeps getting cancelled -- but us, I guess the league just keeps making us play. There is really no other explanation behind it, especially that Denver game ..., while other teams, they haven’t had that many players, and the league hasn’t made any of them dress an injured player just to make sure that there’s a game going on," Embiid said.

When #Sixers All-Star Joel Embiid was asked last night if he thought they should've played all these games recently with so many players missing -- many due to Health and Safety Protocol -- Embiid said, "No." pic.twitter.com/6SuV40A7Hz

Rivers agreed, saying Monday night, "We were not happy with the way that went down. ... We don’t understand why we played that game."

Doc Rivers felt his #Sixers had enough players vs ATL, but as far vs DEN:

"We were not happy with the way that went down...We don't understand why we played that game. But, listen, I'm just the coach. I'm gonna show up & do what they tell me to do, for the most part." (1/2) pic.twitter.com/dxGusFTIQp

Scott returned to action Monday and scored 16 points Tuesday in a spot start, as Curry and Tobias Harris remained sidelined. The Sixers made Scott available to the media postgame. Asked about the sequence of events leading up to the Denver game, he declined to answer.

Embiid, whose availability was initially in question, was cleared before Saturday's game. Simmons' knee injury wasn’t revealed until shortly before the game's start. The NBA fined the Sixers $25,000 for not including him on the initial injury report.

#Sixers head coach Doc Rivers explaining why Ben Simmons and Joel Embiid are not available for today's game against the #Nuggets. pic.twitter.com/OnBEIbF3Je

The #NBA announced the $25K fine handed to the #Sixers for not listing Ben Simmons on the initial injury report for Saturday’s game vs Denver. pic.twitter.com/41CUGBIFMq

It's unclear how long the confusing circumstances of that Sixers-Nuggets game will remain shrouded in mystery.

Meanwhile, the NBA has announced additional restrictions for teams in response to the surge in COVID-19 across the country and the trouble it has caused for the league.

#NBA and #NBPA agreed to further measures for Health and Safety Protocols pic.twitter.com/Bdn1gHc0bb