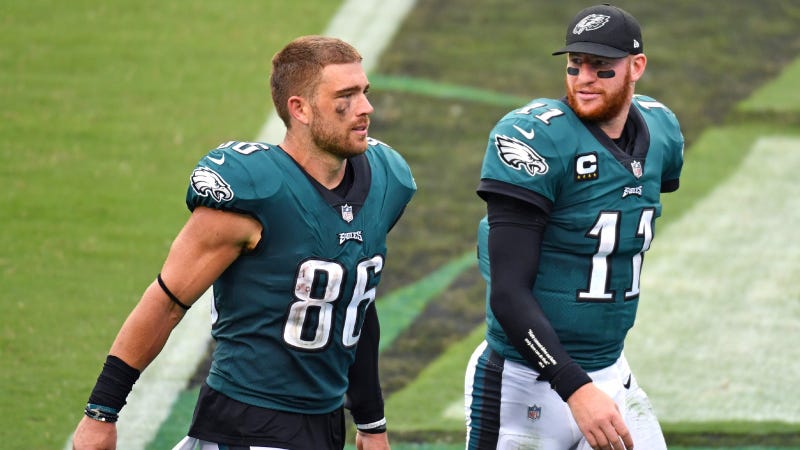 PHILADELPHIA (KYW Newsradio) — It has not been the best month for Zach Ertz.

The veteran Eagles tight end has reportedly been involved in a contract squabble with the team. For someone who has seen the very best both the Eagles and Philadelphia have to offer, it has been a difficult stretch for one of the most popular players on the team.

However, Ertz insisted the contract issue and all of the team's troubles are blocked out when he takes the field for practice and on game days.

"That’s not even in my thought process," said Ertz.  "I’m just focused on trying to win a football game right now. Obviously, we need it. We’re in dire need of winning a football game.”

Few can argue the urgency of the Eagles situation, who need a win or their season may be lost before Halloween.

One player who needs to get back on track in a hurry is Ertz's quarterback, Carson Wentz, who has struggled through the first three games of the season.

Some are wondering if Wentz will ever get back to his MVP form.

Ertz was quick to defend his teammate and insisted the rest of the offensive players must give Wentz more help.

"No one’s hungrier for us to have team success in this building than Carson Wentz," Ertz said. "That’s just the bottom line. He’s going to do everything he can to be the best quarterback he can be, the best leader.  Even though there are times maybe he has a few bad plays, the leadership has never dropped."

Even as Ertz defends his quarterback, it’s clear Wentz has not been on the same page with many of his receivers.

There have been several missed throws which would be considered routine in the past, so while the offense as a whole needs to be better, Wentz also has to find a way out of this subpar stretch of play.

"We're working on it," said Ertz. "Every time we have an incompletion during a practice or in a game, we go onto the side field to work it again to make sure we don't make the same mistake twice."

The 49ers are dealing with a host of injuries, but they are also coming off a blowout win over the Giants.

Ertz is hoping better times are ahead.

"We've all just got to go out there and do our jobs," Ertz said. "And we have to do it to the best of our abilities."