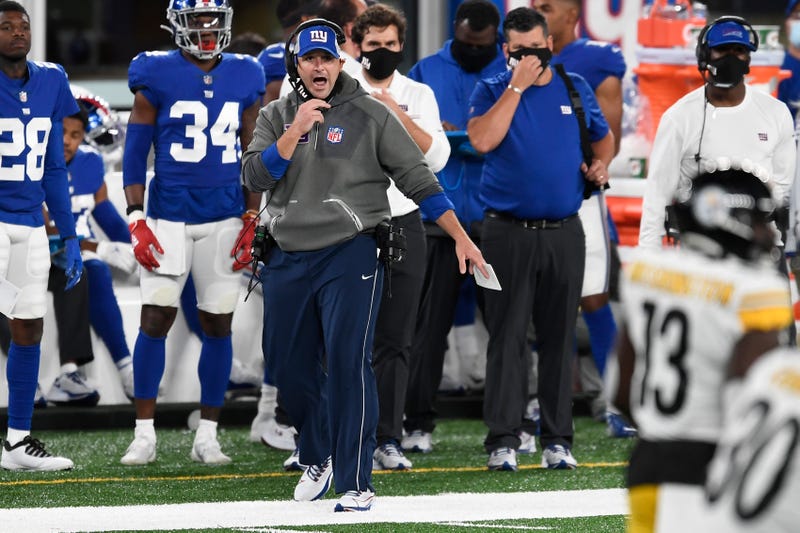 Head coach Joe Judge of the New York Giants directs his players during the first half against the Pittsburgh Steelers at MetLife Stadium on Sept. 14, 2020 in East Rutherford, New Jersey. Photo credit Sarah Stier/Getty Images
By Dave Uram KYW Newsradio 1060

Thursday night won’t be the first time he leads a squad against his childhood team, but it will be as New York’s head coach.

Drew didn’t want to sign with the Phillies after they drafted him in 1997.

According to a 2016 Philadelphia Daily News article, Drew wasn’t the only target of charged aggression. Eagles head coach Doug Pederson said fans threw D batteries at him during his brief — and unsuccessful — 2-7 stint as the Eagles quarterback in 1999.

“It’s an excellent team,” he continued. “It’s obviously a great rivalry. I grew up watching these games. They were always tough games, blue-collar type games when the Eagles and the Giants played when I was growing up.”

Ahead of Thursday night’s NFC East affair, Judge said many of his cousins requested tickets — as far as back as the summer, when the schedule was released. Of course, his wife and children will be in attendance, who, he said, doesn’t like missing games.

Regardless of who’s in the stands — and where their true allegiance lies — Judge has one request.

“My only rule is really anyone who shows up that I either grew up with or have blood ties with — they gotta wear blue,” he said. “I respect their love for the Eagles from being in the town, but hey, look man, you ain’t showing up and cheering against my kids’ Christmas now. So, you better put on the blue and cheer for us.”

Philadelphia native, Joe Judge on his message to family and friends who attend Thursday night’s #Giants - #Eagles game at The Linc - “anyone who shows up has to wear blue!” lol @JClarkNBCS pic.twitter.com/PvT51Z4ysO