PHILADELPHIA (KYW Newsradio) — The Sixers rallied past the Boston Celtics Wednesday night at the Wells Fargo Center 117-109 thanks to another MVP-like performance from Joel Embiid, including 42 points and 10 rebounds.

It was his second 40-plus point performance in just over a week.

It's always good to beat Boston.

The number of foul shots Embiid attempted stood out on his stat line — 17 of his 42 points were free throws, and they came on 21 tries. Meanwhile, the Boston Celtics took only 20 foul shots as a team. 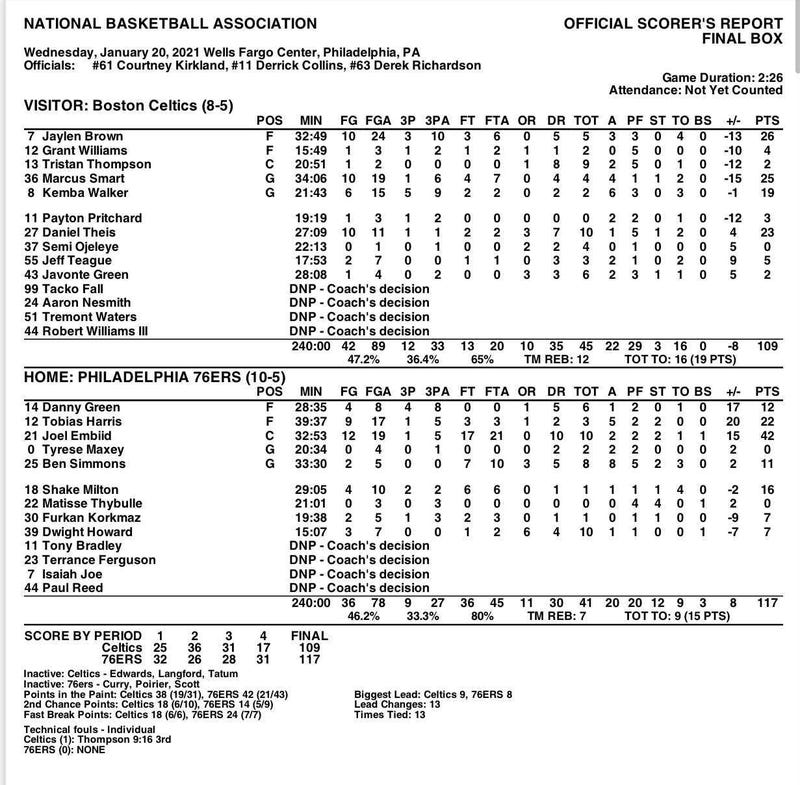 It’s safe to say Celtics guard Marcus Smart wasn’t too pleased about that.

“We got our hands up a lot of the times and he flails and he gets the call, and then down on the other end we got our guys attacking the rim, getting a lot of contact and we’re just not getting the whistle,” Smart said. “It’s tough to play like that. It’s tough.”

After Smart’s comments started circulating, a reporter informed Embiid of the “flailing” remark — one Embiid very much disagreed with.

“Marcus Smart just told me that I flail a lot? Come on,” Embiid said. “I mean, I’m sure he knows himself and he knows his game too. He does a lot of that, and I don’t think I do.”

While it’s not even close to the legendary Sixers-Celtics rivalries like Wilt Chamberlain versus Bill Russell or Julius Erving versus Larry Bird, this is definitely a juicy Eastern Conference storyline early in this season.

“If you watch basketball and if you’re a student of the game and if you actually pay attention during the game, we all say like every single foul, I get fouled,” Embiid continued. “And they probably don’t call all of them like the last one. … So, there’s a lot that they don’t call. And there’s a lot they call because you have to.”

“If the roles are reversed, I’d do it every time. I’d be on too,” Smart said. “If every time I threw my arms up or every time I got touched, I’m going to the free-throw line.”

Embiid believes his counter to aggressive defensive strategy works, and it’s anything but “flailing.”

“It’s kinda hard not to get into a rhythm that way when you shoot 21 free throws alone, and they allow you to hack on the other end,” Smart added. “It’s tough.”

The Sixers came back on Boston with a tremendous fourth quarter, where they outscored the Celtics 31-17. The 76ers, as a team, had 17 free-throw attempts in that period, while Boston had zero.

It’s also hard to debate that he’s able to frequently draw contact from a close defender by swinging the ball and his arms through an opponent. It’s one of his signature moves.

Whatever Embiid does to draw fouls, it works. He averages nearly 10 free-throw attempts a game, and he’s putting together an MVP-type resume 15 games into the Sixers season.