PHILADELPHIA (KYW Newsradio) -- The Phillies announced on Wednesday that over 10,000 fans had participated in their game face cardboard cutout program, which brought in over $320,000. The net proceeds will go to Phillies Charities, Inc.

Citizens Bank Park was built so people could create lifelong memories with those close to them. Fans missed out on that this year because of the pandemic.

“We wanted to be able to connect to our fans, somehow, because that’s obviously been a difficult thing this year,” Phillies Director of Promotions Scott Brandreth said earlier this month.

According to Phillies Executive Vice President Dave Buck, “10,000 photographs of family members, friends, pets and loved ones were sent to us — and each one of those images had a heartwarming story to tell," said in a statement.

Fans were able to buy cardboard cutouts of those images to place in the seats. And the Phils put various other cutouts out there to honor health care heroes, Childhood Cancer Awareness Month, the 1980 World Champion Phillies, the Philadelphia Stars Negro League team, the Flyers, the Eagles and others.

Brandreth said it took only roughly two to three weeks to sell the number of cutouts they did. Going into the promotion, he said, they had no idea what to expect.

As the season rolled along, more and more cutouts filed in, eventually filling the lower level.

“We just kept going. We didn’t really have a plan on what to do.”

Brandreth said the idea initially came from one of the Phillies VP meetings.

“It really added an element to the ballpark.”

Those thousands of happy faces withstood wind, rain and baseballs. And Brandreth says it gave broadcasters something to talk about on radio and television.

“(The cutouts) gave the Phanatic something to do,” Brandreth said with a smile.

The game is still tied.

And the Phanatic is still doing Phanatic things. pic.twitter.com/mVWam2pbuU

These faces weren’t just pictures. They were stories.

Over 10,000 fan cutouts occupy the seats of Citizens Bank Park this season, and each one has a story.

Let us share some of these stories with you: https://t.co/L4i9W4OWGr pic.twitter.com/Kf0nlfowah

“There’s so many stories of lost loved ones or people sitting together that haven’t sat together in a long time because of situations,” Brandreth said. “My parents are out there. My dad wanted to sit with my mom again, so that was kind of a cool thing.”

The season has been over for almost three weeks, and fans have started picking up the cutouts they purchased to take home. 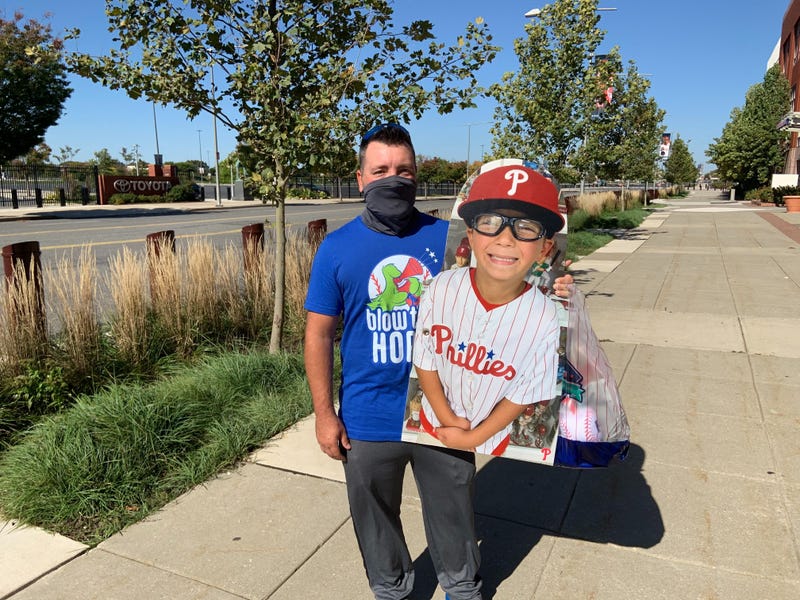 “He was right behind the visitors dugout, so he saw himself a couple times when, I guess, a right-handed batter was up to bat,” Adare said. 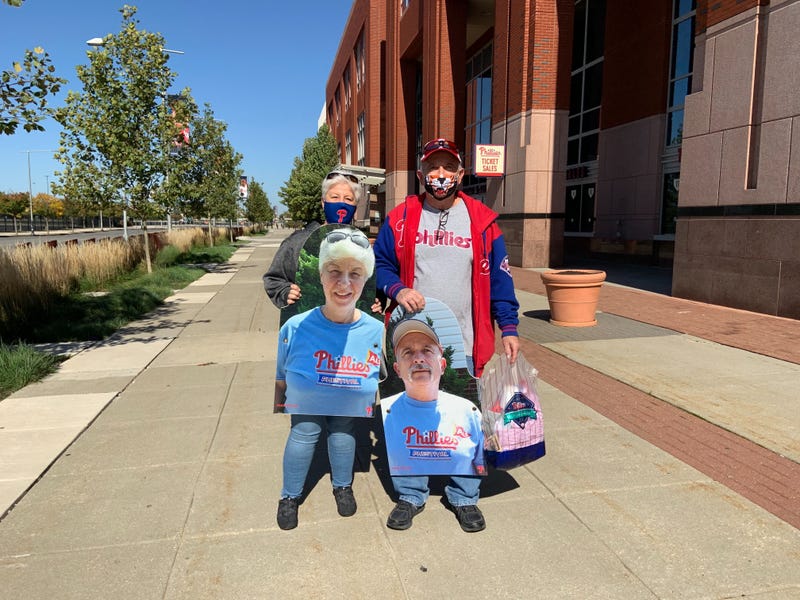 Jae Dimarcantonio of Warminster and her husband Frank had their cutouts in section 110 along the first base line. Although it surprised them that they weren’t placed together, they were thrilled to participate.

“Very, very happy that we were able to help contribute,” Jae said. “We always come down to (the Phillies Phestival to fight ALS). That’s usually what we do for the charities, so since that wasn’t gonna be happening this year, we felt we would do this.” 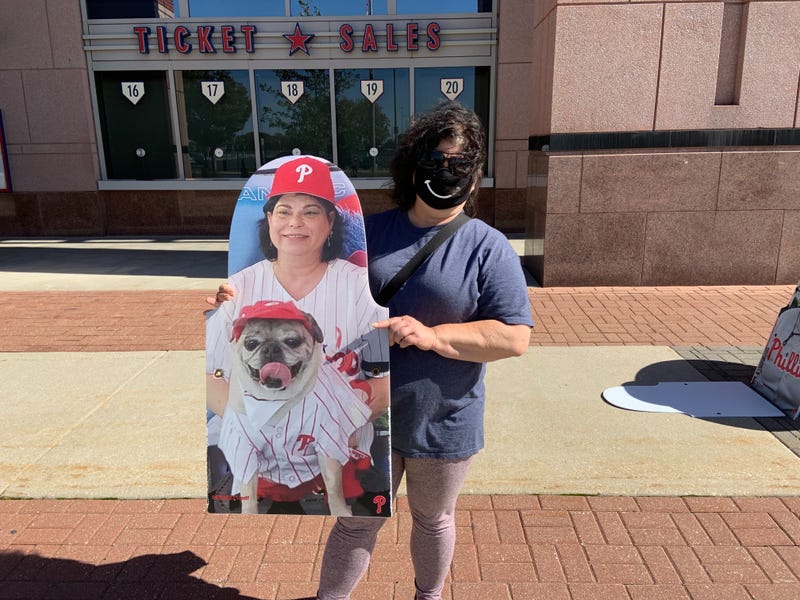 Heidi Gold of Philadelphia bought a cutout of herself and her dog, Pugsly. Photo credit John McDevitt/KYW Newsradio

And Heidi Gold of Philadelphia bought a cutout of herself and her dog, Pugsly. She has the perfect spot for it at home.

“Believe it or not, I have two seats from Connie Mack Stadium in my house, so it’s going right back into a seat.”

As a bonus, the 48 cutouts that were hit by Phillies home-run balls were signed by the players responsible.

48 cutouts were hit by Phillies home run balls at Citizens Bank Park this season. To apologize to (and thank) those fans, the players who hit the homers signed their cutouts to be returned to them!

These fans will also get tickets to a 2021 game & a package of promotional items. pic.twitter.com/yih3kTlwqI