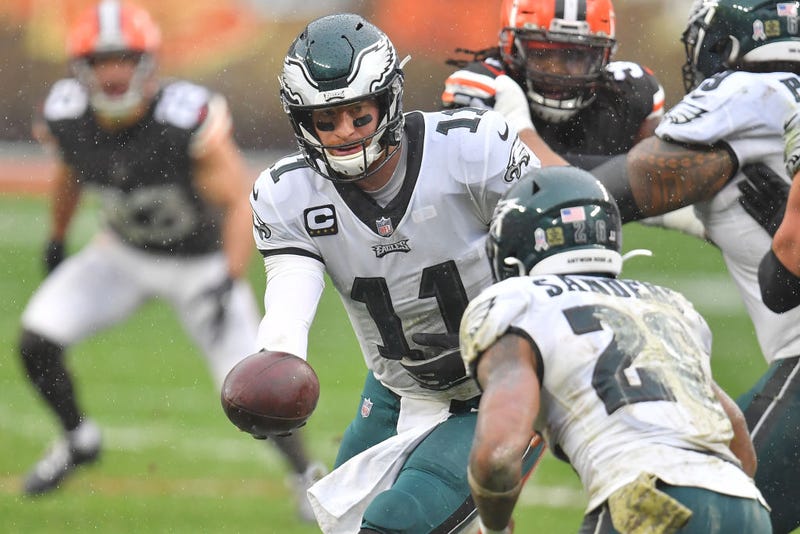 PHILADELPHIA (KYW Newsradio) — Fans howling for a quarterback change by the Eagles won't get their wish.

After another poor performance by Carson Wentz in Sunday's loss to Cleveland, coach Doug Pederson said he has no plans to make a change at the position.

Pederson reemphasized his point on Monday and said Wentz will once again be under center when the Eagles host the Seahawks next Monday night. He understands that both himself and Wentz will get the bulk of the criticism in a season like 2020, but said that the rest of the players and coaches must also find ways to improve.

"It's all about the QB and the head coach," said Pederson. "Everybody else can almost go by the wayside, I guess, so it's almost like a two-man band. But there is enough work to be done, as I've mentioned, by all positions.​"

That work will need to be done in a hurry.

The Eagles are 3-6-1 and appear to be fading fast. Even though they are still in first place in the NFC East, they are only a half game ahead of the Giants, Cowboys, and Washington.

Pederson said his team has already overcome adversity this season and believes they can do it again before the 2020 campaign slips away.

"There has been a lot of things that have surrounded this football team this year with the pandemic and COVID and injuries and different things," Pederson said. "We still have a lot to play for. We still have an opportunity in our division to win the division eventually, and hopefully it's going to take everybody."

After Sunday's loss, Pederson said the next six games would give him an opportunity to see "who's in and who's out" for the season.

That statement led to speculation of whether some players may have raised the white flag on the rest of 2020. Pederson said that was not the case and it was simply part of a general message to the team.

Even if the Eagles win their weak division, it is easy to wonder just exactly what kind of opportunity awaits.

The Eagles would be a huge underdog should they reach the postseason and would likely be facing a first-round exit.

Pederson is hoping the chance for a division crown will still serve as motivation for his players, but wants to see the same commitment from his team no matter where they are in the standings.

"There is enough to go around that none of it is excusable," Pederson said.  "We all hold each other accountable, coaches and players. That's why I keep saying that we have a lot to play for. There is a lot of pride here."