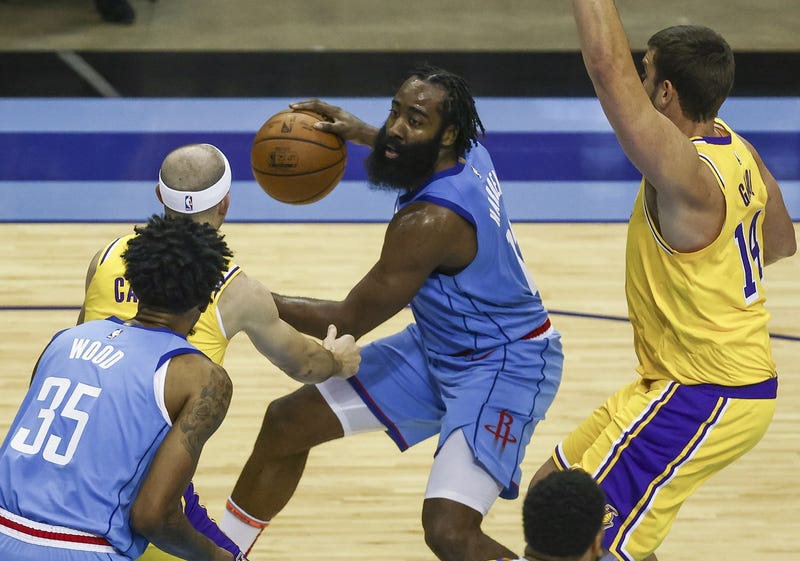 PHILADELPHIA (KYW Newsradio) -- The Houston Rockets are not trading James Harden to the Sixers. The Rockets instead traded the 31-year-old to the Nets in a multi-team deal, instantly increasing pressure on Brooklyn, now with three superstars on their roster, to advance to the NBA Finals.

One way to look at the blockbuster NBA transaction is it makes the Sixers' road to winning the Eastern Conference much more difficult now.

Another way to look at it is Brooklyn mortgaged the future to win in the short term, while the Sixers got to keep their draft assets — at least for the time being (Harden isn’t the only star in the sport) — as well as rising 24-year-old All-Star Ben Simmons.

An offer from the Sixers included Simmons and second-year player Matisse Thybulle, according to Shams Charania of The Athletic and Stadium, as well as The Inquirer’s Keith Pompey and Marc Narducci.

On @Stadium: The Nets and 76ers competing over last 24 hours for James Harden; Philadelphia and Houston discussions around Ben Simmons/Matisse Thybulle; and expectation on the return of Kyrie Irving. pic.twitter.com/o3sk9UCokS

Tyrese Maxey’s name was floating around internet on Wednesday, as reports indicated Houston was interested in the exciting rookie.

The Rockets are pursuing a trade package from the 76ers that would be headlined by Ben Simmons and Tyrese Maxey, league sources say

Source says Tyrese Maxey was not discussed as a part of deal https://t.co/kAreUgf1RJ

Harden was not happy in Houston. He wanted out so badly that he publicly said the Rockets aren't good enough and their struggles this season can't be fixed.

James Harden on the #Rockets:
"We're not even close, honestly, to (the Lakers) ... and to just all the other elite teams out there."

"We're just not good enough -- chemistry, talent-wise, just everything -- and it was clear these last few games." pic.twitter.com/rNHKMjxW0c

In the deal, the Nets gave up first-round picks (unprotected, according to ESPN) in 2022, 2024 and 2026; agreed to first-round pick swaps with Houston in 2021, 2023, 2025 and 2027; and parted ways with several contributors, including the particularly talented, developing players Caris LeVert and Jarrett Allen.

In other words, the Nets let go of a strong hold on the next seven drafts for this season and next by trading for Harden, and possibly a third if he accepts his lucrative player option. Of course, Brooklyn could always find a way to extend him.

While the Nets have clearly shown they believe their championship window is now and they’re going all-in for that, it’s certainly risky. Billy King, a former Sixers and Nets general manager, and current WIP Morning Show co-host and contributor, traded away several of the Nets' future first-round picks in 2013 to the Boston Celtics for aging stars Kevin Garnett and Paul Pierce. It didn’t work out in Brooklyn’s favor, and it took the franchise several years to recover.

So, if you’re an upset Sixers fan who thinks they’re wasting Joel Embiid’s prime by not striking a deal for a superstar like Harden, it clearly would have cost the team a lot. Time will tell whether or not this was worth it for the Nets. The only thing that may validate it is the Larry O’Brien Trophy, or at least a trip to the Finals.

Meanwhile, it’s fair to wonder how Simmons may react to hearing his name in these rumblings. Even though President of Basketball Operations Daryl Morey went on the record to The Athletic and Stadium in December that they’re not looking to trade Simmons, Wednesday’s reports don’t surface for no reason.

However, according to Marc Spears of ESPN’s The Undefeated, early indications are that Simmons is happy to stay in Philadelphia and not head to Houston.

Hearing Ben Simmons was pretty ecstatic to not be traded from the Sixers to Houston for James Harden and believes his team is capable of bringing a title to Philadelphia. Doc Rivers is also a huge fan of Simmons and believes the best is yet to come with two-time NBA All-Star.