PHILADELPHIA (KYW Newsradio) — There have been a host of frustrating performances by the Eagles this season. Sunday's loss in Cleveland is right near the top of the list.

The Eagles fell in Cleveland, 22-17, as they dropped to 3-6-1 on the season. In a season which has been a nightmare for Carson Wentz, the quarterback had arguably his worst performance of the year so far.

Wentz threw an interception which was returned for a touchdown in the first quarter that gave the Browns a 7-0 lead. He would throw another interception and nearly threw a third pick which would have wiped out a field goal try in the fourth quarter. Coach Doug Pederson said after the game he never considered putting Wentz on the bench.

"I think you're sending the wrong message to your football team that your season is over," said Pederson. "That's a bad message. We have to work through this. When times get tough, sometimes that might be the easy thing to do."

The offensive line gave Wentz little help as he was sacked five times and pressured throughout the afternoon. However, Wentz is now struggling in a way Eagles fans have never seen in his five years with the franchise. Wentz said he wasn't bothered by questions to Pederson about being benched and said he remains confident despite a bad performance against the Browns.

"It's always a scrutinized position playing quarterback," Wentz said. "That's what I signed up for when I came out and played quarterback going back to high school. I can take it. It is what it is. Are we playing as good as we can as a team? No. Am I playing my best football? No." 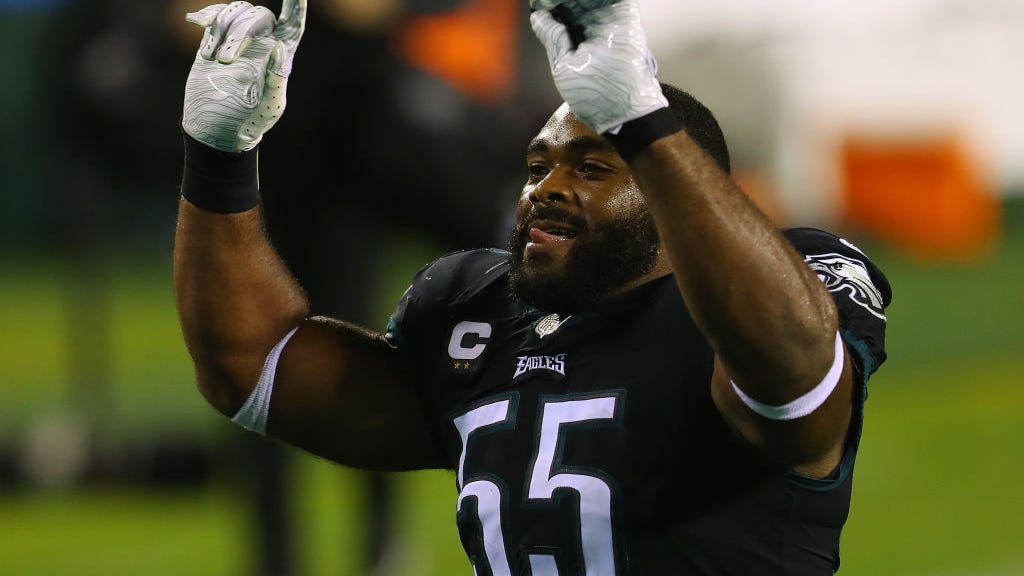 Like many across the country, Eagles players plan for a low-key Thanksgiving

The Eagles' defense did it's job with nine of Cleveland's points coming on defensive scores. It would not be enough thanks to the struggles of Wentz and the offense. The defensive players did not point fingers after the game and Brandon Graham says it's up to everyone on the team to focus on correcting their mistakes before it's too late in the season.

"We're still a half game up," said Graham. "It's on us. This is the most 'on us' that I've been a part of that we've got to go out and fix it, and we've got six games to do it. We've got some fighters in here. We want to get this thing right."

It doesn't look any brighter for the Eagles going forward with Russell Wilson and the Seahawks up next. At 3-6-1, the Eagles are still miraculously in first place in the weak NFC East, but even that appears to be slipping away with the lead down to just a half a game.  Pederson sees the mistakes his team is making. It is becoming more and more unlikely they will be able to fix them before the end of the season.