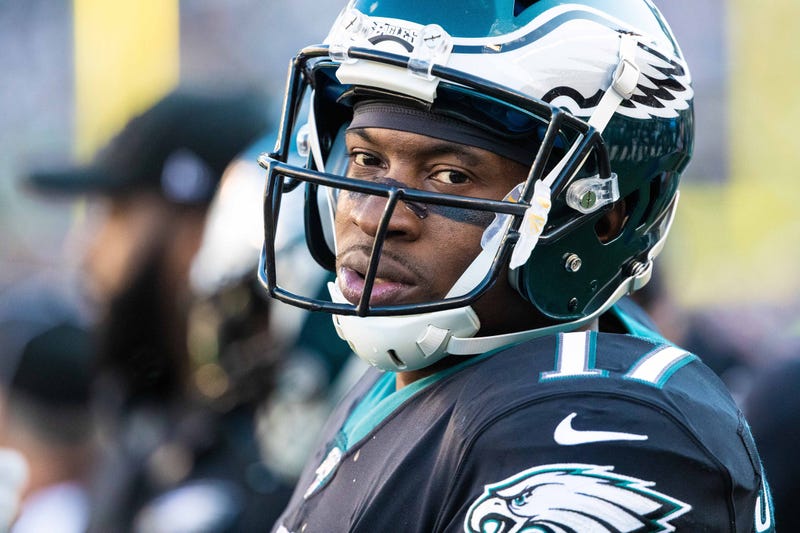 PHILADELPHIA (KYW Newsradio) -- Alshon Jeffery has experienced the high of highs with the Eagles and is now on the complete opposite end of that. Jeffery helped this franchise win Super Bowl LII, while playing injured, but as time has gone on, it’s been a far cry from the remarkable catch he made that night.

When the Eagles play the Giants on Thursday at the Linc, Jeffery is going to miss his 11th game in a row, dating back to last season when he injured his foot. It required surgery, which he reportedly underwent this past December.

It’s not surprising Jeffery’s recovery and rehab has taken a long time. What is worth questioning, however, is the Eagles' decision to activate Jeffery off the Physically Unable to Perform List, otherwise known as PUP.

Leaving him on would have kept him out at least the first six games, but he wouldn’t have been taking up a roster spot.

The Eagles are at their seventh game, and Jeffery isn’t taking the field against New York.

“It was a mistake on the part of the organization,” SportsRadio 94WIP’s Ray Didinger told KYW Newsradio.

“They just mishandled that. They were sort of gambling that Jeffery would be available to them before this. If they knew that ... he was gonna be this slow coming back, then you could’ve put him on that list and saved yourself a roster spot. ... With the number of injuries they’ve had, and the number of guys that have come and gone, that one roster spot could’ve really helped … It’s one of just of many things that have gone array in this Eagles season.”

The Voice of the Eagles, Merrill Reese, told KYW, “The only thing you can say about — it was a miscalculation of his injury on some people who make that decision for the Eagles. They thought he would be ready earlier, he wasn’t and you had a roster spot that was not being used, so that’s a mistake.”

Back in September, despite Inquirer reporting that the Eagles were trying to trade Jeffery — a player making a lot of money, who has been rumored to be attached to anonymous criticism of Carson Wentz, which Jeffery denied —Roseman insisted that wasn’t the case.

“We are not actively shopping him, as reported,” Roseman said. “But I think for us, you know, let's get the good player back as soon as possible. I'm not telling you that he's ready for week one, but we definitely anticipate him being ready before that PUP period.”

What would have been when the PUP period ended — and still no Jeffery, who has been listed as a limited participant at practice at times this season. He’s missed others because of his foot, and a couple due to illness.

When asked for an update on Jeffery on Wednesday morning, head coach Doug Pederson said, “Alshon still with a short week. It’s just hard to get him the reps that he needs.”

Wednesday’s official estimated injury report released by the Eagles listed Jeffery as a non participant at walkthrough, this time noting a calf issue in addition to his foot.

It remains to be seen when Jeffery, 30, will play a game. With how the Eagles handled the situation in September, it seemed like that would’ve happened already. While he and DeSean Jackson, 33, have been absent for about half of the season so far, young receivers like Travis Fulgham and Greg Ward have been emerging and developing chemistry with Wentz.

Jeffery was financially rewarded for his essential contributions to help this team win what was an elusive championship. He also played well in 2018 before a very costly drop in the playoffs that led to the end of the Eagles season and title defense.

Alshon Jeffery: 'I think I have the best hands in the league' pic.twitter.com/96OWQOzcGs

If he can trend towards the production of his first two seasons in Philadelphia, that would be very helpful to an Eagles team in need of as many playmakers as possible. In the meantime, he’s taking up a roster spot, but not lining up against opposing defenses on game day. ​