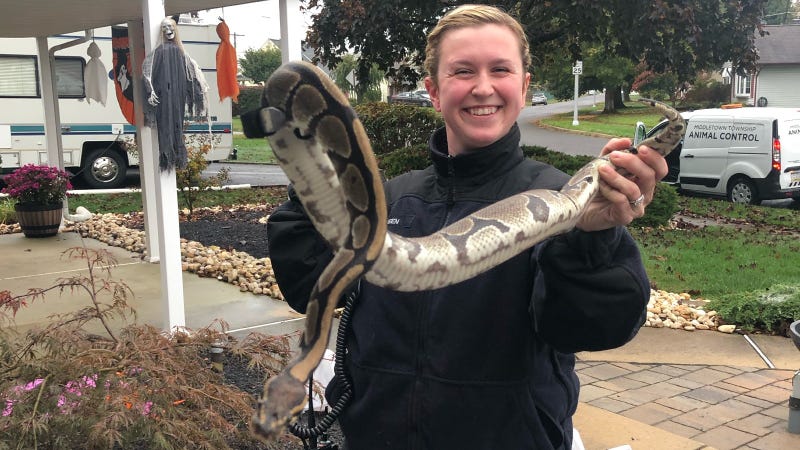 LEVITTOWN, Pa. (KYW Newsradio) — Middletown Township police are asking Levittown-area residents in the Quincy Hollow neighborhood to be on the lookout when they step outside after three large African pythons were recovered this week near a garage and two homes.

Cheyenne Keen, animal control officer for Middletown Township police, said she captured the three ball pythons on Monday, but one died after she took them to the Bucks County SPCA.

“Four-foot pythons don’t just go missing without somebody noticing,” she said. “So, we do believe that somebody either released the animals or dropped them off in a parking lot. We’re unsure of who at this point.”

Keen said the snakes are native to West and Central Africa and are popular as pets.

She said police put the neighborhood on alert because they don’t know if any more snakes were released.

Keen said they’ll be easy to spot because of their size.

“If you see a large snake, it’s nothing to be scared of,” she said. “You don’t have to try to pick it up yourself, just give me a call and I will come get it.”’

Keen said abandoning pets isn’t the answer in these times.

“If somebody’s in a situation where they can’t care for their pets or they feel like they’re backed into a corner, please, please, please reach out to animal control or your local shelter or SPCA,” she urged.

Keen added the two surviving snakes are likely to be turned over to a reptile rescue group for adoption.