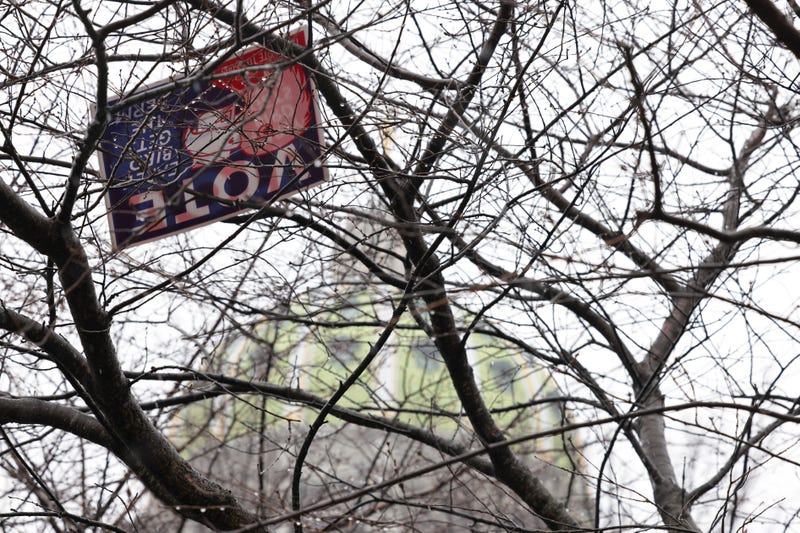 A "Vote" sign is seen stuck in a tree in front of the Pennsylvania State Capitol on Dec. 14, 2020, in Harrisburg, Pennsylvania. Photo credit Michael M. Santiago/Getty Images
By Jim Melwert KYW Newsradio

But Brewster’s Republican challenger, Nicole Ziccarelli, filed a federal court challenge on New Year’s Day, contesting mail-in ballots that arrived on time but were missing dates on the envelopes.

During the swearing-in, Republicans argued the state Constitution gives them the right to review all elections of members of the Senate. In return, Bucks County Democrat Steve Santarsiero said if they’re delaying one certified election result, they should delay them all.

“A candidate’s disappointment should not ever result in overturning our Democratic process,” he said.

But the Republican majority swiftly voted down Democrats’ efforts to delay all the swearings-in — and shouting matches ensued between parties.

When Lt. Gov. John Fetterman, the presiding officer pending the election of a new president pro tempore, refused to acknowledge a GOP motion, he was replaced by the interim leader, Jake Corman, on a party-line vote.

“There’s nothing about this day that is appropriate — nothing,” shouted Democrat Anthony Hardy Williams, who represents Delaware and Philadelphia counties. “This is about Pennsylvanians, not Democrats or Republicans. It’s not about simply winning. It’s about protecting our democracy.”

Chaos and shouting in the Pennsylvania State Senate as the Republican majority refuses to swear in a Democratic senator and votes to remove Lt. Gov. @JohnFetterman (D-PA) from presiding over the session.

More mayhem spilled into the typically pro forma ceremony. Brewster asked Democrats to back down and allow the others to be sworn in.

Montgomery County state Sen. Art Haywood, a Democrat, said after what he just witnessed, he questioned if Corman had the proper temperament to be the Senate’s leader.

Corman was elected to the post and sworn in.

Ultimately, Brewster was not sworn in. In a statement, Gov. Tom Wolf said Senate Republicans “spread disinformation” to “subvert the democratic process” and ignore “the voters in the district.”

“It is simply unethical and undemocratic to leave the district without a voice simply because the Republicans don’t like the outcome of the election,” he said. “Voters, not Harrisburg politicians, decided this election, and Sen. Brewster is the rightful winner.”

There’s no timeline for when Brewster could be sworn in. His absence doesn’t affect the majority, as Republicans outnumber Democrats, holding 28 of the 50 seats.