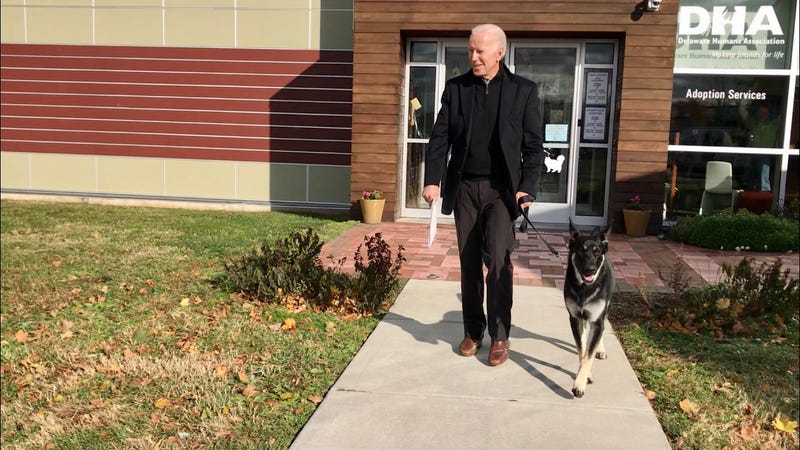 PHILADELPHIA (KYW Newsradio) — Joe Biden isn’t the only major figure who will be sworn into office.

Ahead of the president-elect’s inauguration, the Delaware Humane Association will host an “indoguration” in honor of Major, the first shelter pup to join the White House.

The Bidens have two German shepherds, Champ and Major. Major was adopted a couple years ago from the Delaware Humane Association in Wilmington.

“With the spotlight on Major’s story right now, we just really hope this will inspire folks out there to consider animal adoption,” said Cory Topel, spokesperson for the Delaware Humane Association. “You can get wonderful dogs just like Major from any local animal shelter.”

The virtual event, also hosted by Pumpkin Pet Insurance, is raising awareness and funds for animals in need of forever homes, like the soon-to-be first dog.

In 2018, a litter of six German shepherd puppies was surrendered to the Delaware Humane Association. After health examinations, it was determined the pups ingested a toxic substance. The shelter was able to raise money to save the puppies’ lives.

“Well, sure enough, the Bidens caught wind of it,” recalled Topel. “Major was the only male in the litter. Joe Biden came in one weekend with a few of his grandkids — just knocked on the door like anyone else, no fanfare. He said he wanted to meet and see the litter of puppies. They ended up falling in love with Major, and the rest is history.”

Today is Major’s lucky day! Not only did Major find his forever home, but he got adopted by Vice President Joe Biden &...

Major Biden’s Indoguration Party will be held over Zoom on Sunday at 3 p.m. A minimum $10 donation is required to attend.

“We are inviting people to attend and bring their pups onto the call,” added Topel. “We are also hoping to create the world’s largest virtual gathering for dogs. It’s a goal of 1,000 attendees.”