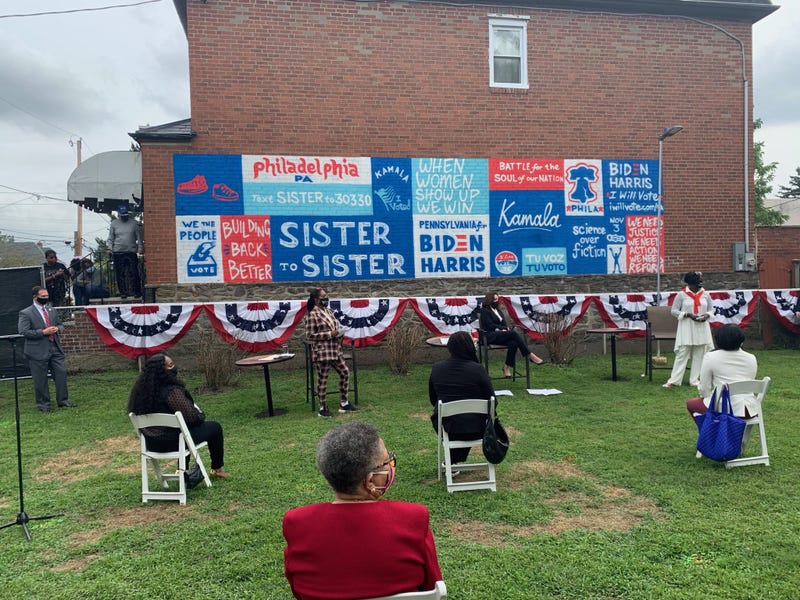 PHILADELPHIA (KYW Philadelphia) — Sen. Kamala Harris had a full day in Philadelphia on Thursday, motorcading from neighborhoods in the city's Northwest to Kensington for a series of events. Her mission: to woo the city’s Black and Hispanic vote for the Democratic presidential ticket.

Cheers greeted the senator everywhere she went — no surprise, given the city’s well-known Democratic majority.

Voter turnout in Philadelphia is always the concern for presidential candidates. It’s not a question of whether the ticket will win here, but by how much. The city overwhelmingly goes for the Democratic ticket, but turnout determines whether it’s enough to balance out more conservative parts of the state, and the burden has grown.

Four years ago, Philadelphia delivered what was expected for Hillary Clinton, but turnout elsewhere gave Donald Trump the state’s electoral votes. Harris’s job was clearly to provide the motivation to energize the voters Joe Biden needs to win the state.

First stop for ⁦@KamalaHarris⁩: Ogontz Ave. she seems to have lots of fans here. Now having lunch with ⁦@DwightEvansPA⁩ at #Relish pic.twitter.com/znRgualUyV

After visiting small business along Ogontz Avenue, the Democratic vice presidential nominee ate lunch at Relish and then attended a question-and-answer session with Black women, in Councilmember Cherelle Parker’s yard in Mt. Airy.

"Let me just say how honored and excited I am to be with these phenomenal sisters, because truly we all know that none of us sit where we do at this moment were it not for the sisterhood," Harris said.

Harris talked about disparities COVID-19 has thrown into high relief.

"In one way, perhaps, there has been an opportunity for more people to see what some of us have been knowing for generations, about systemic racism and long-standing disparities that are perpetuated by systems and by people."

The audience was clearly already sold, but cohost Sheryl Lee Ralph urged them to help gin up turn-out.

"All of the women here must bring men to the polls with you," Ralph said.

"It will be our intention to address those inequities in a way that is more reflective of what we say we are, which is a democracy that is committed to equality and equal justice under law," she said.

President Donald Trump has also been courting Latino voters. At an event in Phoenix this week, he said he loves Latinos.

“I have always known how great you are,” he said.