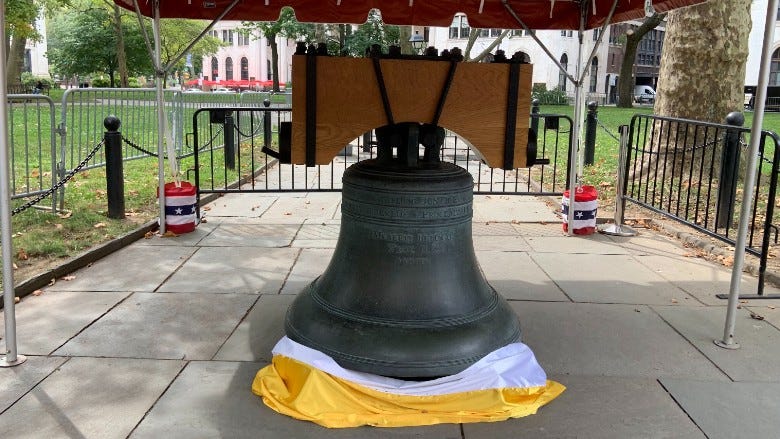 PHILADELPHIA (KYW Newsradio) — A symbol that let liberty ring for women fighting for the right to vote more than 100 years ago is temporarily on display outside Independence Hall.

It looks just like the Liberty Bell, but it’s the Justice Bell, a symbol of the suffrage movement that has the words “Establish Justice” inscribed on it.

Ranger Sara Karpinski with Independence National Historic Park said the bell was trucked all over the state of Pennsylvania more than a century ago.

“It had been made as a replica of the Liberty Bell in 1915 by a Pennsylvania suffragist, and it had toured around the state in hopes of getting Pennsylvania women the right to vote,” she explained.

Karpinski said the referendum failed, but the bell was chained the entire time as a way to recognize that as long as women didn’t have a voice, the bell also wouldn't have a voice.

The bell was unchained with the passage and ratification of the 19th Amendment in 1920.

The bell will be here through October before it returns home to Valley Forge at the Washington Memorial Chapel.

An exhibit inside the Liberty Bell Center on the suffrage movement is on display through March.