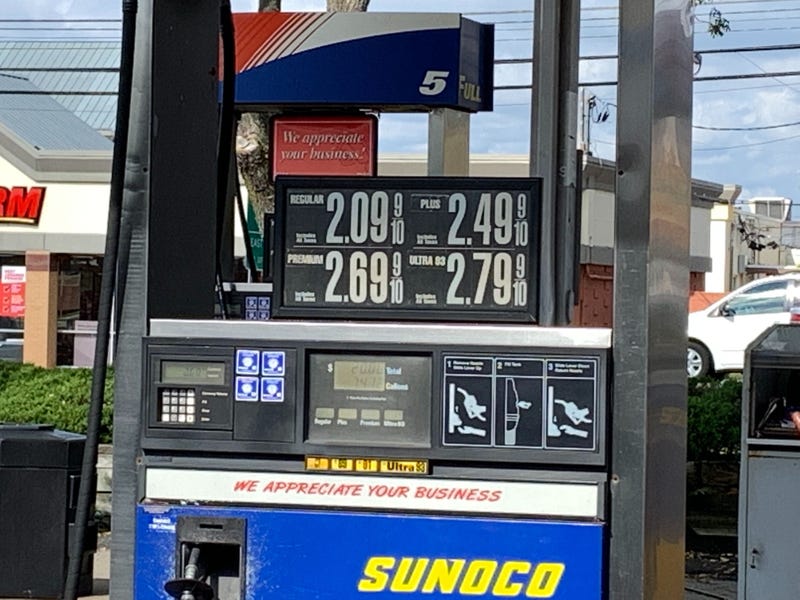 A Sunoco gas station in Cherry Hill must abide by New Jersey's latest gas tax increase of 9.3 cents. The tax is now set at 50.7 cents a gallon — the fourth-highest gas tax in the nation. Photo credit Mike DeNardo/KYW Newsradio

SOUTH JERSEY (KYW Newsradio) — The gasoline tax officially rose 9.3 cents in New Jersey, making it the state with the fourth-highest gas tax in the nation.

Gas revenue, which has dwindled due to the coronavirus pandemic, failed to meet the minimum needed to maintain roads and bridges, so the state Department of the Treasury announced the hike would automatically go into effect on Thursday.

The increase complies with a 2016 law created to ensure the New Jersey Transportation Trust Fund is adequately funded.

Glenn Mohrfeld, who owns a Sunoco station in Cherry Hill, admitted he has no choice but to pass the 9.3-cents-per-gallon increase along to his customers.

“Our margins are always slim — 10, 12 cents profit. So at a 10-cent increase on the tax, and then you add in your credit card fees, you’re going to run definitely in the red,” he said.

His customers don’t have much of a choice either.

“I think people are numb anymore to the tax increases. They just accept them and bury their heads in the ground and just go forward,” he said.

“I don’t think that it’s something fair because someone like me who has to use premium gas,” she said, “it’s going to be a burden on me to have to fill up to go to work. I’m still working.”

“I go to work and I come home, and I go to the grocery store and I go home. I don’t do a lot of driving, particularly when I have to use premium gas,” she added.

Still, Rozier noted the tax increase will hurt those who can least afford it.

“It won’t affect me as much, but because I care more about the person that has less than I do — my motto is, ‘service for humanity.’ Where’s the humanity in this?” she asked.

Other drivers simply accepted it.