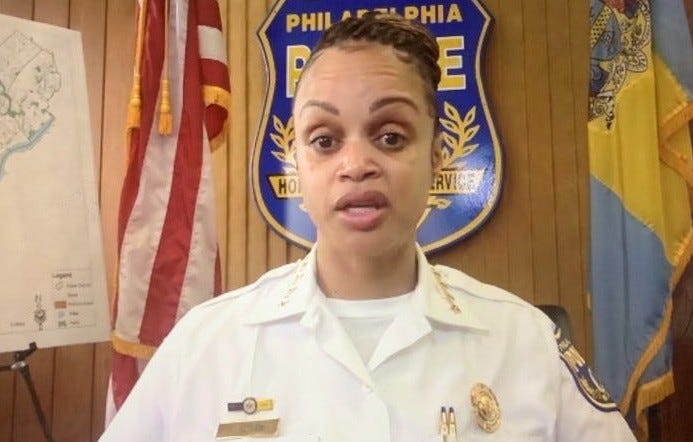 PHILADELPHIA (KYW Newsradio) — Philly's top cop is firing back at the District Attorney's Office, after a photo surfaced of the wall dedicated to fallen Philadelphia police officers in the office covered by a large banner with the new DAO emblem. The commissioner says the banner could have been simply moved.

A police union spokesman posted a picture on social media of the "Wall of Remembrance" covered by the banner, and that's where District Attorney Larry Krasner's spokeswoman Jane Roh jumped in.

She responded on her public account, saying the pandemic "has required different spaces in this city to be used for specialized purposes. We are legally required to cover the Wall of Remembrance when this room is used for certain purposes. *We* follow the law."

Roh then said, "Unlike..." and shared stories of Philly officers arrested and charged.

Mike, you well know that the emergency of the pandemic has required different spaces in this city to be used for specialized purposes. We are legally required to cover the Wall of Remembrance when this room is used for certain purposes. *We* follow the law. https://t.co/CjMqucUJat

Police Commissioner Danielle Outlaw fired back to Roh's tweet, writing, "The discussion at hand was about honoring and respecting officers who made the ultimate sacrifice. A simple 'it was temporary' would have sufficed. In the future, considerations should be made to find a space where covering up a memorial to our heroes wouldn't be necessary."

The room in question is where press conferences, public events and large training sessions happen, and is lined with windows, available to others on the office's floor to peek inside.

Several sources within the office says paper has occasionally been put over those windows where the wall is, for just about a day or two, and then removed and put up again weeks later — but the banner covering the wall has never been removed.

Several attorneys who practice in the city said the only legal reason they can think of for such a covering would be a grand jury investigation, which are kept entirely secret, but they aren’t held in the office because of matters of secrecy.

When asked over email, Roh replied, "I am prohibited by law from telling you what court proceedings the room is being used for."

"Wall of Remembrance" memorializing Philadelphia police officers murdered while serving our city was covered up. The DA's spokesperson stated that it was required by law because of how the 800 sq ft room was being used. She then cited police officers accused of wrongdoing. ... pic.twitter.com/G7Qlm4P7ye

Councilman David Oh responded to the matter on Twitter, saying he would send a formal request to the District Attorney's Office for an explanation.