PHILADELPHIA (KYW Newsradio) — Saturday's protests over the death of Black Minneapolis man George Floyd, who died on May 25 as a police officer knelt on his neck, led to a night of riots and violence in Center City. But looting has continued, causing Philadelphia officials to take added measures to control the situation in the aftermath.

City officials have announced a 6 p.m. curfew for Sunday, through 6 a.m. Monday, with only people performing essential duties allowed on the streets. The curfew was originally scheduled to begin at 8 p.m.

At an afternoon press conference, Mayor Jim Kenney expressed sadness over Saturday's events. But he also said he felt hope while touring the damage and seeing Philadelphians taking the initiative to help clean up.

Police Commissioner Danielle Outlaw reminded people the protests early Saturday afternoon were peaceful and orderly. "The criminal activity was not a part of those protests and serve absolutely no legitimate purpose," she maintained.

207 people have been arrested so far, for a range of violations from theft, burglary, looting and assaults on police officers, to firearm, curfew and code violations. According to Outlaw, those numbers will likely grow as more arrestees are processed.

13 officers were injured, from broken extremities to chemical burns. All of them were treated at area facilities, though one officer who was hit by a car late Sunday night is still hospitalized.

The commissioner also updated the city's requests for mutual aid, confirming they've reached out to the Pennsylvania National Guard for support, in addition to surrounding counties and the Pennsylvania State Police.

During the press conference, Outlaw announced vehicular access to Center City will be restricted from Vine to South streets, and from Schuylkill to Delaware rivers. This includes surface streets and expressway exits.

The Ben Franklin Bridge has been closed until further notice by order of Pennsylvania Gov. Tom Wolf, according to police.

Traffic Advisory: BEN FRANKLIN BRIDGE IS CLOSED BY ORDER OF THE GOVERNOR UNTIL FURTHER NOTICE. THERE WILL BE NO FOOT TRAFFIC OR VEHICLES ALLOWED.

Service has been suspended on 23 bus routes operating in that area because of the riots and looting. John Golden, SEPTA's public information manager, said if those routes service passengers outside of Center City, that part of the service is still available.

"People who want to take those trolley routes, they just can't get on at the stations at 22nd Street and 19th Street. They are closed at the request of Philadelphia police," explained Golden.

Golden said he can't predict how long the interruptions will last, as that depends on conditions in town.

PATCO has stopped service in and out of Philadelphia as well, and is only operating in New Jersey.

While parts of Philadelphia engaged in cleanup efforts, more instances of looting took place in the city. 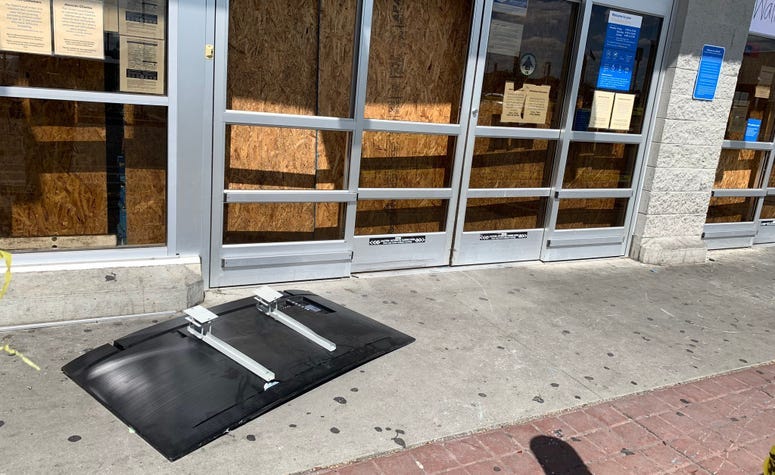 Three to four people were arrested at a nearby Walmart at Aramingo Crossing, after being caught loading merchandise into a truck behind the store. In front of the Walmart, several more were arrested, and one dropped a flat-screen television near the entrance. A second flat-screen was seen in the parking lot.

The officer was taken to a nearby hospital and is expected to be alright.

A heavy police presence responded, with what was described as a military-style vehicle circling the block. An officer was seen firing smoke bombs at protesters in an attempt to disperse them, as the vehicle rounded the block.

Pennsylvania Gov. Tom Wolf spoke out Sunday afternoon against the ongoing violence and looting in Philadelphia and other cities in the commonwealth. He called for calm and for residents to protest in peace.

Wold said he's been in close contact not only with Kenney, but other leaders, including Pittsburgh Mayor Mark Peduto and Harrisburg Mayor Eric Papenfuse, and that contact will continue.

"To make sure that everyone is able to make their voices heard, while we are keeping everyone safe," he pleaded, "I urge everyone in these demonstrations to be peaceful. I urge everyone to have respect for the communities and our neighbors. I urge all of us to continue to call out injustice. We should be doing that."

Wolf also offered his condolences to every victim of oppression, racism, and violence.

"Every day in every corner of our society, we need to work constantly to eliminate racism," he said. "We need to ask ourselves how we can do that. This means we need to do our part to address it, from the smallest through to the biggest action, here in Pennsylvania and everywhere."

As Kenney remarked, many Philadelphians woke up Sunday morning ready to help.

Facebook groups and people's natural call to action made parts of the city feel the spirit of brotherly love again, even in the early hours. They spent the morning cleaning glass, embers, and various store items strewn about.

For Lisa Glover, who lives off John F. Kennedy Boulevard, it was devastating to see the day turn to chaos.

"You don't fight hate with hate," she said. "And we felt as soon as we could wake up this morning when the ban was lifted, we'd come out and start banding together and helping this city start the process of rebuilding."

Mary Strain brought her two sons to help. She said she understood the message but not the destruction.

"We really support Black Lives Matter, we support the protestors and we support our city," she said. "So we just want to do everything we can to be proactive in keeping the peace and cleaning up and being part of the solution."

Glover hoped the cleanup efforts could send a different message about the city.

"I think it shows how strong Philadelphia is," she expressed. "The hate and violence that happened last night will not outpower the love and strength we have for our city."

Strain echoed that statement. "I think it's just really important to show not only the city but the world that we're still united people despite the attempts to divide us and that we can fight for justice and do that together," she said.

Philadelphia's Department of Public Property cleaned the graffiti from City Hall and the Frank Rizzo statue in front of the Municipal Services Building.

Kenney said city personnel cleaned the entire area, and that the statue was not prioritized. He also said existing plans to move the statue will be accelerated in the coming month.

"I never liked that statue," he shared in a moment of candor. "I can't wait to see it go away."

Many business owners in Philadelphia are picking up the pieces, following the destruction to their properties following the riots.

Leon Scott kept a close eye on this weekend's protests and riots in Philadelphia from the safety of his home, but that did not keep him from feeling the firsthand affects of the vandalism.

"When I saw what was going on," he said, "I looked at my cloud cam, and just happened to see a few people entering my store."

Scott, the owner of Silver Legends Jewelry in Center City, said he has not even begun to calculate just how much damage was done to his store.

"Some merchandise taken, my cash register was taken, windows were broken, and my door was kicked in," he detailed. "I was irate. It was pretty much unimaginable for me. I was just taken completely off guard."

Scott said he spent Saturday night and Sunday morning boarding up his business, and cleaning up the rubble. He even got some help from neighboring business owners who had their properties breached.

"I'm certainly not happy about what happened to my business and other businesses in the city and around the country, but you can almost feel, it's almost palpable how angry everybody is, and frustrated," he said. "This is just how some people are taking that frustration out."

Because of the pandemic, Scott said they've been doing business online. He'll continue to do that until he's allowed to reopen and his shop is repaired.

Vandals broke the front gate and windows of Eye Candy Optical in Center City, according to owner Tim Sagges, who said that was just the beginning.

"(They) then proceeded to go inside and just ransacked the whole place," he said. "They stole all of the frames, or very many of them, and anything that was glass was smashed."

Sagges says his business had been closed for some time because of the pandemic. Now its doors will remain shut even longer. He said between the destruction and lost inventory, he is looking at a approximately $50,000 in damages.

As Sagges works to clean up his shop, he said he's still in a state of disbelief.

"I understand why people are angry and upset," he sympathized. "I just wish maybe they could take their anger and their violence to the doorstep of people who it needs to be taken to, instead of small businesses that are in their own neighborhoods."