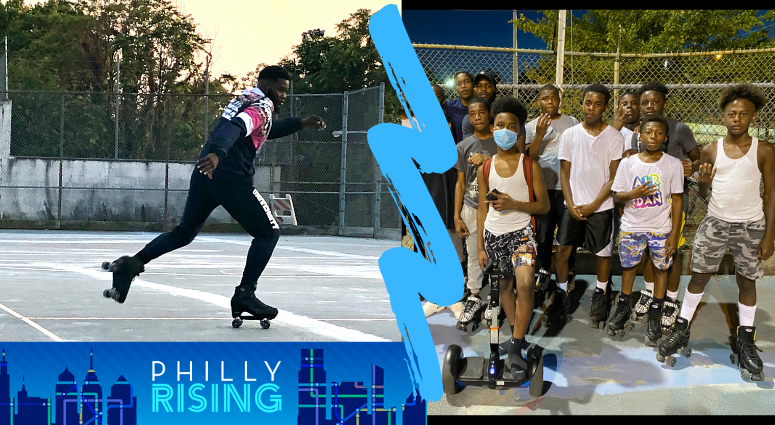 PHILADELPHIA (KYW Newsradio) — The throwback hobby of roller-skating has been making a comeback recently, but for Cohen Thompson, it never left.

The 33-year-old from West Philadelphia went viral during the height of the pandemic for showing off his skating skills in his scrubs. He was featured on the Kelly Clarkson Show, Access Hollywood, Entertainment Tonight, as well as a few local news stations.

“When the plastic surgery spot closed due to COVID, I went up to the New York area just to help them out and I brought my skates up there. Everybody was doing different challenges and I ended up doing it just so happened to go viral,” he said.

Thompson, a surgical first assistant, has been using the spotlight to make a difference. Over the summer, he spent thousands of dollars and countless hours renovating a neglected park, turning it into a skating rink in the West Philadelphia community.

And that’s what he did.

He painted and paved the park, then began hosting barbecues for the community to enjoy.

Skate University at Granahan playground Jun 27th.... Thank you to everyone who showed love to us and our community

Thompson, cofounder of the nonprofit Skate University, said he eventually purchased nearly 100 pairs of skates for kids to borrow while at the park.

Now, he generally spends three days out of his week working with young people, many of them young men, and teaching them how to skate.

The space has become a safe haven for the community, where they can have fun and explore their creativity.

“Some kids could come here or they could stay on the corner. It cost you nothing to just come here and have some fun,” he said.

Tamika Jewett, who lives in Overbrook, said her two sons look forward to coming out to skate each week.

“They needed something other than just football, because that’s kind of the only thing we have in the community. To have like art activities and skating and options for the kids to pick and choose what they want to do is important,” she said.

Thompson is also teaching the kids he interacts with to aspire and dream.

“Anybody could do what I’m doing if they just had the opportunity. There’s nothing special about what I’m doing. That’s what I just wanna show people. I’m not a hero. I’m Black, I got a beard, I look just like you, I’m from the same place as you, same thing I’m doing, you can do,” he said.

Thompson recently lost his young nephew to gun violence, and said opening up about his own struggles and vulnerabilities has helped him connect with the young people who are facing similar adversities.

He’s found his niche in what he calls medical skating.

“Both of my occupations are tying together. My medical career, that’s how I was found skating. I was helping out in COVID and I was in my scrubs skating. If it wasn’t for me just being brave enough to go up there and help, this would have never happened,” he said.

He believes that now, he’s saving lives in more ways than one.

“Nowadays, people will look at somebody like myself and they’ll judge me by the cover not knowing that I could possibly save your life or I could be helping your kid learn how to skate. Either way, I’m saving lives.”

Thompson hopes that local leaders and others will support his efforts so that he can expand programming and vital services to the local community.