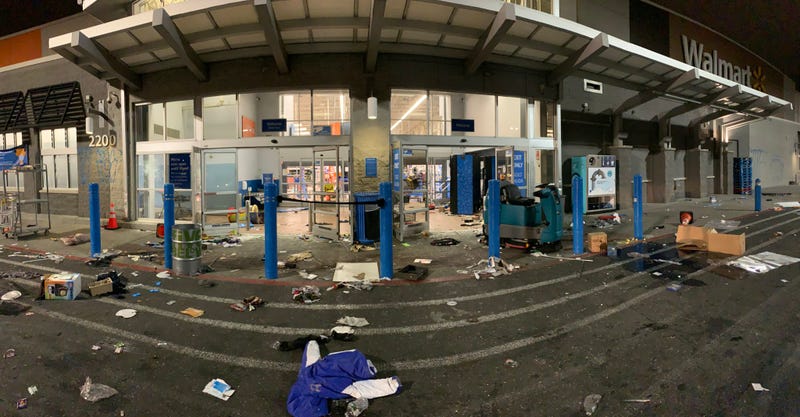 The Walmart on Aramingo Avenue in Port Richmond was hit hard by looters, among many other stores in the area's shopping centers, on Tuesday night. Photo credit Tim Jimenez/KYW Newsradio
By Tim Jimenez, Hadas Kuznits, and Mike Dougherty KYW Newsradio 1060

PHILADELPHIA (KYW Newsradio) — There was more chaos in Philadelphia overnight with looting and vandalism in different parts of the city, far from where protesters gathered. Groups of demonstrators gathered outside the 18th police district building in West Philadelphia, protesting the police shooting of Walter Wallace Jr., leading to clashes between officers and protesters.

About 10 miles away, on the other side of the city, it was a different story. KYW Newsradio was at the scene in Port Richmond on Tuesday night on the Aramingo Avenue commercial corridor, where looters destroyed stores and ran away with whatever they could get their hands on. 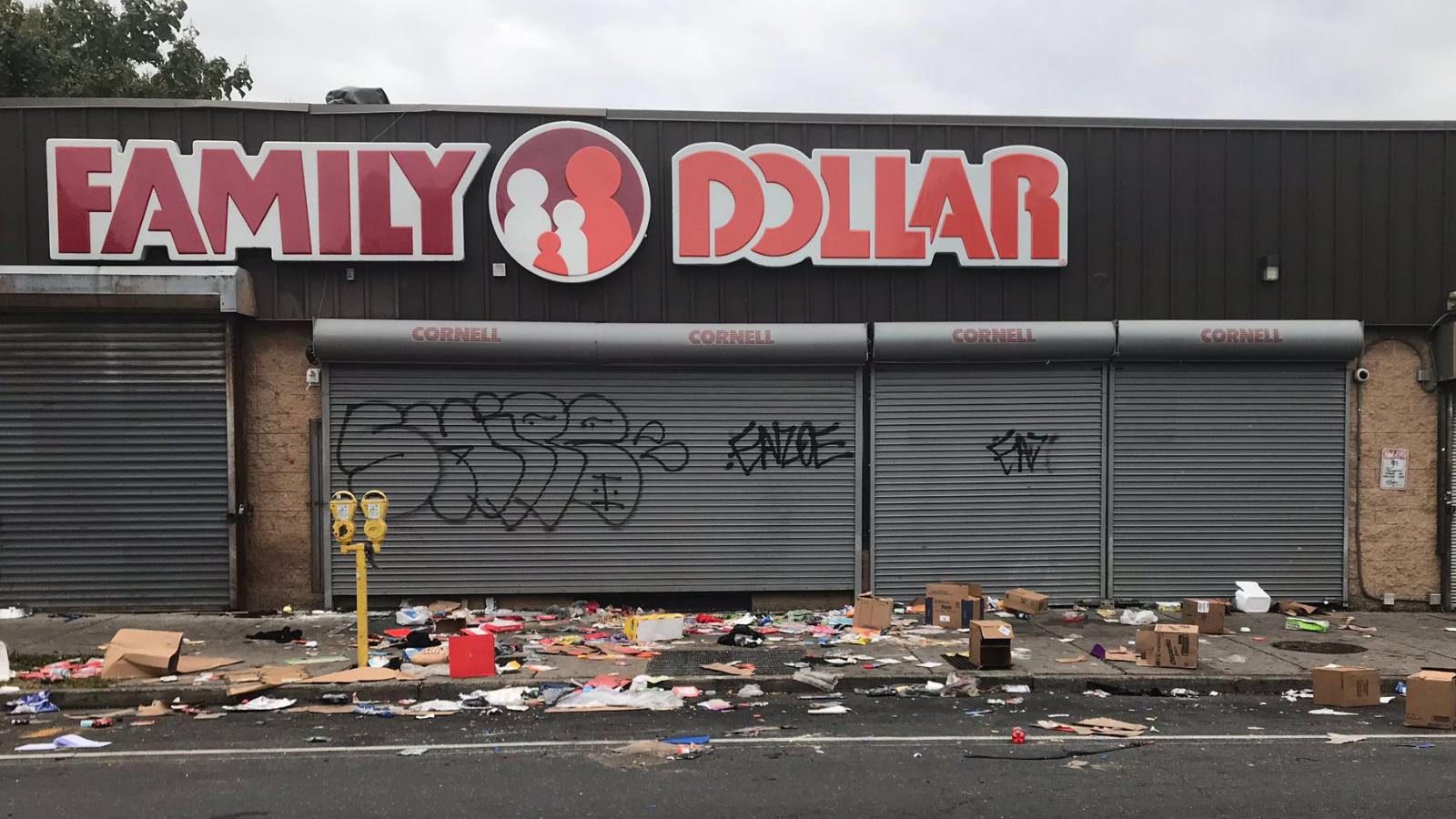 Nothing was off limits. People filled cars, stolen shopping carts and their arms with alcohol, clothing and shoes. Someone was seen carrying away a small planted tree. Another rolled away a dolly with a washing machine on it.

Police arrived on the scene, but their presence did not seem to deter looters. One man yelled from the open door of his car, "We're going Christmas shopping."

People seem to be getting “dropped off” to come and loot Port Richmond. Did this guy just steal a washing machine? @KYWNewsradio pic.twitter.com/k4HWX693fZ

Drivers dropped off friends, who ran into stores. Young people in masks were everywhere. It seems no shop across the Aramingo Avenue strip malls was unscathed.

Wednesday morning revealed a big mess up and down the avenue. Windows were smashed and stores had been ransacked by looters who made their way past plywood barriers tacked up to keep them out. In front of the Ross Dress For Less anchoring the Imperial Plaza Shopping Center was a mess of hangers, baskets and carts, and the alarm was going off inside the store for no one to hear.

Looting and vandalism for a second night in Philadelphia. This is at the Imperial Plaza on Aramingo Avenue, which is far from where the protests happened last night following the shooting death of Walter Wallace. pic.twitter.com/F7S7ISadKD

All the shops at the Aramingo Crossings shopping center were hit. The biggest target was the Walmart, a disaster zone surrounded by glass and debris and shopping carts. The parking lot looked like the aftermath of a tornado, with trash and merchandise scattered everywhere -- hangers, food, clothes.

The front entrance was smashed through, and just inside the store, soda and toy machines were busted open. There were unused bullets that people tried to take from the store, scattered all over the floor.

Inside the front entrance of the Wal-Mart on Aramingo Ave. Police were also just here and arrested one man who was inside. pic.twitter.com/a6iZyPw5Tf

With water flowing from a pipe inside that was broken during the chaos, the floor throughout was flooded. And police were on scene early Wednesday arresting a man who was inside.

“This is hell. We living in hell. It’s horrible,” said resident Jeanette, who declined to give her last name.

“What is this gonna solve. Poor store people, they can’t even come back from the last one," she said, referring to the looting in June that following George Floyd’s killing. "And now look at this stuff right here. What is it coming to?”

She lives in Port Richmond nearby and saw all the damage, and she couldn’t contain her frustration.

“This is very far from West Philly, and this wasn’t called for," she said. "They want to protest? They didn’t need to do this. Go down there and give the family some support and protest the right way.”

Tyree, another neighbor who also declined to give his last name, agreed.

“This is radical. We gotta eat. We live around here. My wife is scared to go to the store,” he said.

Tyree said, as a Black man, he understands the outrage, but he says looting isn’t the way to get the message across.

The Wallace family has come out strongly against looting and violence.

Most of the looting activity ended in the early morning hours. There were still some people out and about at dawn, including some rummaging through the debris.

Some businesses in Center City had boarded up their windows, anticipating a night of looting similar to what the violence in June following the killing of George Floyd. However, the area seemed to have been undisturbed overnight.

Overnight, police reported a total of 81 arrests, mostly burglaries. There were nearly 300 reported incidents of looting.

Twenty-three officers were injured, but all have been treated and released. Nine police cars were damaged, and at least nine ATMs across the city were blown up.

Since the beginning of the civil unrest Monday night, police have processed 172 felony or misdemeanor arrests.

In anticipation of a third night of chaos, the city has issued a curfew, starting at 9 p.m. and lasting through 6 a.m. Thursday.

news
Obama says he may take COVID vaccine on TV so 'people know that I trust this science'
music
Rapper admits he would let his wife sleep with Drake for a feature
news
Rockefeller Center Christmas Tree turns on, with virus rules
music
Jon Pardi is getting his new wife a cow for Christmas
music
Miley Cyrus explains how her house fire led to marriage with Liam Hemsworth
news
‘Shark Tank’ star Daymond John reveals creative business solutions to survive coronavirus pandemic