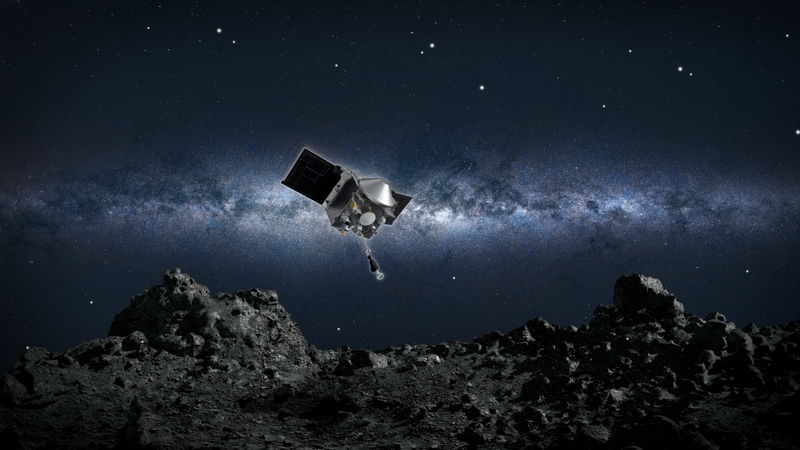 A rendering of NASA’s OSIRIS-REx spacecraft collecting a sample from the asteroid Bennu. Photo credit NASA/Goddard/University of Arizona
By Mike Dougherty KYW Newsradio 1060

GLASSBORO, N.J. (KYW Newsradio) — More than a decade of work is coming to fruition for a team of scientists, including a professor from South Jersey, who have been trying to pluck a sample from an asteroid.

“Twelve years of my life I have spent working on this project!” exclaimed Dr. Harold Connolly, a professor of geology at Rowan University and a member of the OSIRIS-REx mission team. “The spacecraft literally orbits the asteroid right now.”

One of the goals of the $800 million project is to better understand asteroids.

“We’ll collect up to 2 kilograms of samples and bring it home in 2023 for us to study the origin, evolution and nature of the material from the early solar system,” Connolly said, which may give them more information on several things, including the origin of life. “They have preserved material that was formed before the planets were formed.”

Collecting a sample from an asteroid that is moving through space kind of sounds like trying to catch a fly with chopsticks. So how exactly do they do it?

“First, you have to move your chopsticks around the fly while it’s moving and orbit it, and then you can go ahead and collect it,” Connolly said.

This asteroid is about 25% larger than the Empire State Building. Scientists chose to chase this one over others because it was the most accessible.

NASA will begin live coverage of OSIRIS-REx’s sample collection of the asteroid, named Bennu, at 5 p.m.

Go for Orbit Departure! Our @OSIRISREx spacecraft is leaving the asteroid’s orbit before descending to the surface for today’s sample collection attempt.

The project has been a dream come true for Connolly. Ever since he was a boy growing up in Barrington, New Jersey, he had always hoped to work on a space mission.

“I remember very well the images coming back from the Voyager missions (in 1977). I was glued to my television set here in South Jersey,” he recalled. Now, “we are in the Guinness Book of World Records as being a spacecraft orbiting the smallest planetary body in the solar system.”