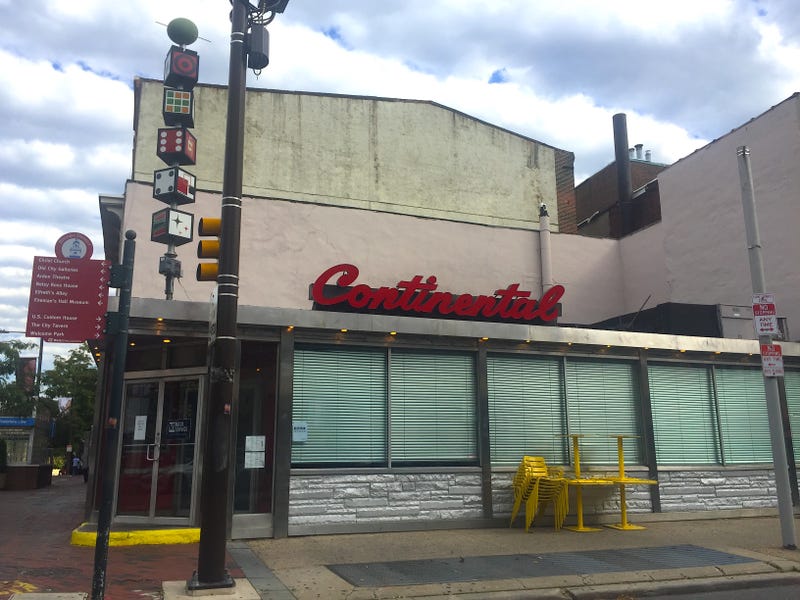 The Continental Restaurant and Martini Bar at Second and Market streets is closing after 25 years due to the coronavirus pandemic. Photo credit Rachel Kurland/KYW Newsradio
By Hadas Kuznits

PHILADELPHIA (KYW Newsradio) — Like so many restaurants struggling due to COVID-19, the iconic and enduring Continental Restaurant and Martini Bar is the latest dining casualty of the coronavirus pandemic in Philadelphia.

Restaurateur Stephen Starr said the restaurant at Second and Market streets has faced uncertainty ever since the city shut down in March. He confirmed it will close this weekend — just about a month after celebrating its 25-year anniversary.

Starr said the restaurant was in need of some improvements at some point, but it was really the pandemic, a lack of seating and the season that forced him to make this decision.

“Between the COVID virus and the restrictions that were put on us, it just can’t survive once it gets into the cold weather,” he said, “because the Continental’s not that big.”

However, Starr owns the building, so he promises it will eventually be reimagined and reopened — potentially by the end of next summer — though he hasn’t decided exactly when.

“As either a redo of what it is in some way, shape or form or something totally different. We don’t know,” he added.

The Continental Restaurant and Martini Bar opened in 1995 at a time when Philadelphia’s dining scene was in its infancy.

The lines snaked around the corner when it opened, Starr recalled. He was surprised by its popularity amid Philadelphia’s fledgling restaurant culture.

“A lot of celebrities came in over the years — the hockey players, the mobsters, any movie star that was in town would always stop in,” he remembered.

“The response was overwhelming,” said Starr, “way more than I ever thought. And then that movie came out with Vince Vaughn (in 1996), ‘Swingers,’ and that was all about the cocktail culture. So I opened, ‘Swingers’ came out, and then there was an explosion.”

The Continental also sparked a shift in Philadelphia’s nightlife, in terms of ambiance and demographics.

“Before the Continental, it was kind of dull in the city,” he said, then “Old City became the place for people to go, especially young people.”

Twenty-five years later, there’s a new crop of young people eager to explore the neighborhood that Starr contributed to. The Starr Restaurant Group operates three dozen restaurants in six cities, but the Continental was Starr’s first.

“This is my baby,” he said, “and this is where it all started. So it’s hard, but it’s been a long time. Twenty-five years is really long. So it’s OK, it’s time, and I think when it comes back, I think the next generation of young people will appreciate it.”